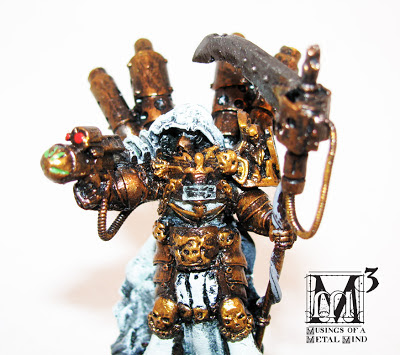 For those of you who haven't read his statline and abilities by now, Mortarion, in-game, can pretty much kill an entire standard 2000 point army by himself, with room for afters (providing you never, ever roll a 1). All of the Primarchs, in fact, are ludicrously powerful (and should be), not to mention ludicrously priced (despite preexisting competition)  and by the time FW gets to the Emperor (in 12 books or so) I expect to see 40k's first 1000-point character, if not one that breaks that 4-digit cost. Oh well. At least we get some new, if very pricey, models to look at. I'm not going to gush about the new FW Angron because, well, I think it's rather boring. 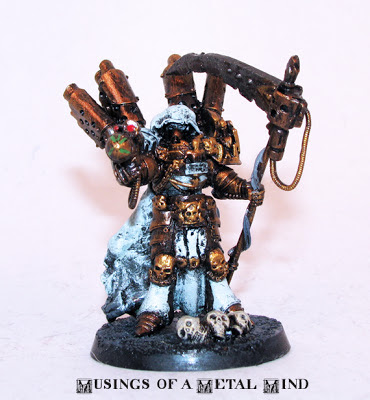 Mortarion is based on Kabuki Models' Uriel, from their Dark Messiah line. I can't tell if they mean for this line to be a game, a line, a state of mind or whatever, but it is full of some very nice, if reasonably priced, models. My only complaint about them is that heads, being proportionately correct, are too small compared to 40k-scale heads, and so side by side the models would look rather weird. I had originally intended for Uriel to be Sanguinius, but A) his pose is far too static and B) I didn't want to have to green stuff all that hair. Plus, his body was covered in so much lovely death imagery that I figured it was only a short leap to the master of the Death Guard.  The head is from a Valkyrie door gunner, and the scythe blade from an old Rackham dwarf who now swings a more appropriate axe.

Any interest in seeing Rackham dwarves? They're quite characterful, if oversized. No? Yes? Anyway, moving on...His belt buckle is a rather hastily molded Death Guard crest on a terminator hip pauldron. It didn't come out quite as well as I'd hoped, but still says "Death Guard", doesn't it? 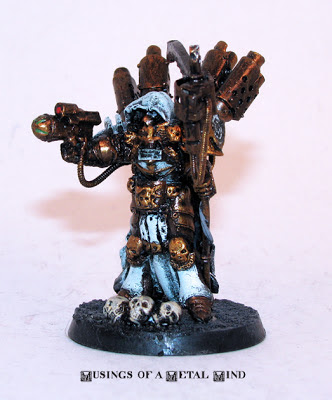 That right arm took a bit of remolding; originally it was palm-down and pointing at... well, you, I suppose. I don't know what the original model was going to do with his not-very-threatening lance, but I thought him blasting away with the Lantern would be more threatening by far. Originally I'd thought to make it out of an actual lantern,  but the lantern bits I'd had on hand were either too big or two small, so more's the pity. 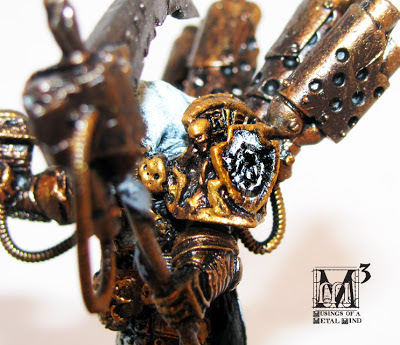 Kabuki sculpts these really nice shoulder pads with shields for heraldry, so I tried my best for another DG crest. The only problem is, of course, that the are within was way small, and my smallest brush was getting rather fractured at that point. They do sell the shoulder pads separately, by the way. 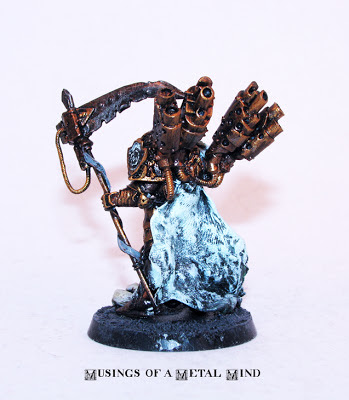 I used ork bike exhausts along with some power cables for his backpack, which makes him look rather like a walking chemical plant. They flare out nicely in a wing-like fashion, which I prefer to some of the other 3rd-party reproductions that look more like a walking pipe organ. Speaking of pipe, in hindsight I should've thickened that scythe handle somehow, but the blade has bit of wire running clear through it and around the other side (hidden by that grille) and it's not like I'll be hauling him to a lot of games, anyway. 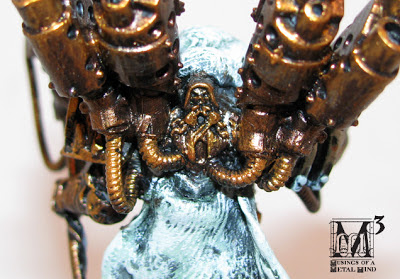 He also has this lovely little chained Grim Reaper back there, which is I suppose is the 31st century way of saying "don't wear this in a closed garage". I had thought for some tracery on the cloak, too, but Mortarion is more the working man's Primarch, all about sticking it to overlords on mountain tops, and so I thought he'd be above such finery. Also, I'm a bit lazy and my eyesight's too poor to go putting tracery on everything. 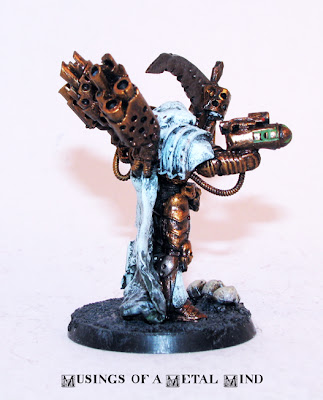 Vintage model enthusiasts among you will note that the Lantern is, in fact, constructed from the back end of a Battletech Warhammer's PPC. The barrel is, presumably, elsewhere. I had the bit in my box, and it looked just big and retro-sci-fi enough to be a decent facsimile of the artwork, so I decided to go for it. I need to look for a bit showier of a base in the future; the one that came with Uriel was more of a half-shelf, and not very useful or interesting in this case. 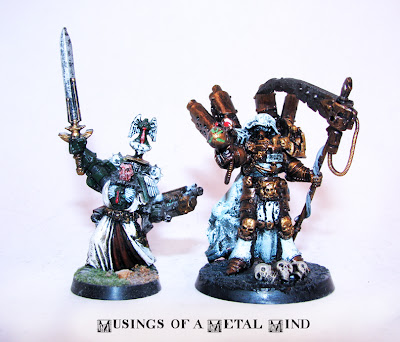 The Primarchs are, of course, giants, towering over even the already towering Astartes. If Azrael here ever ran into Mortarion, he'd be David to Mort's Goliath, although this time Goliath would be stronger, faster, and certainly cleave him in two with that scythe.

More models, and something of a review next time.

For all of you in the Northeast, particularly PA, NJ, and NY, stay well, and stay dry!
Posted by Mark at 9:07 AM 2 comments: