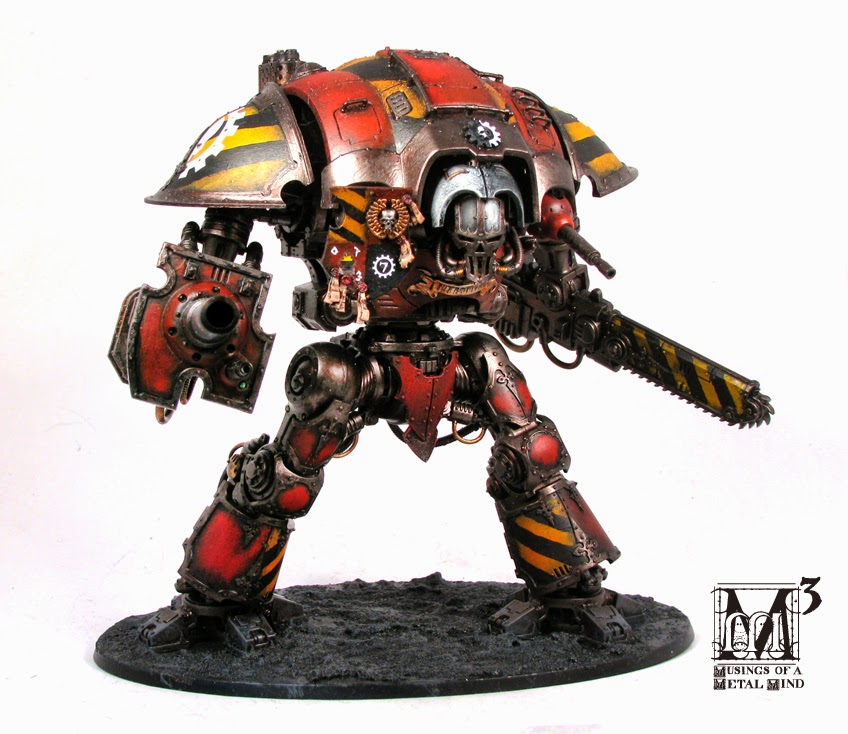 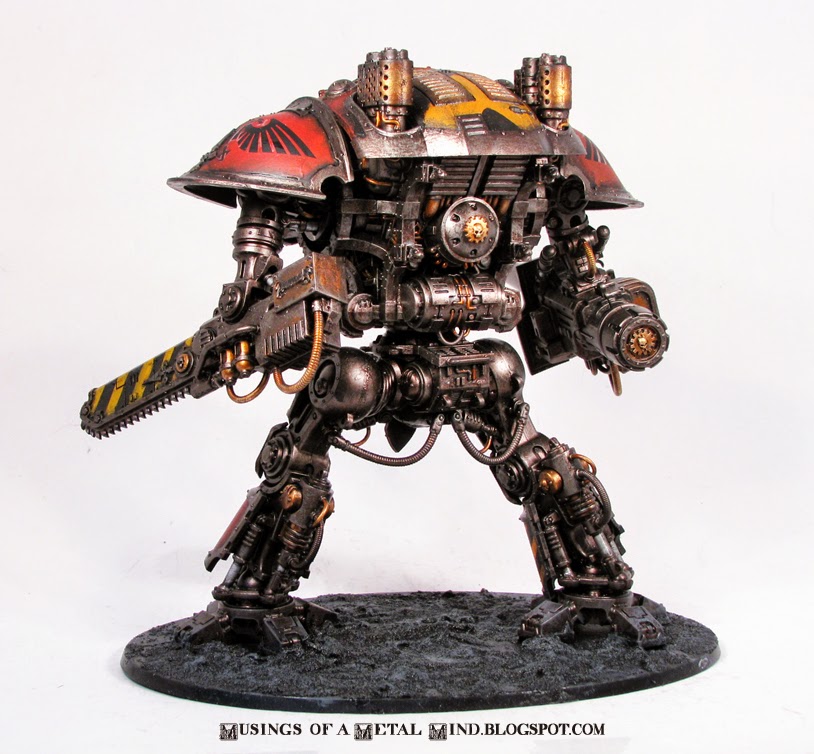 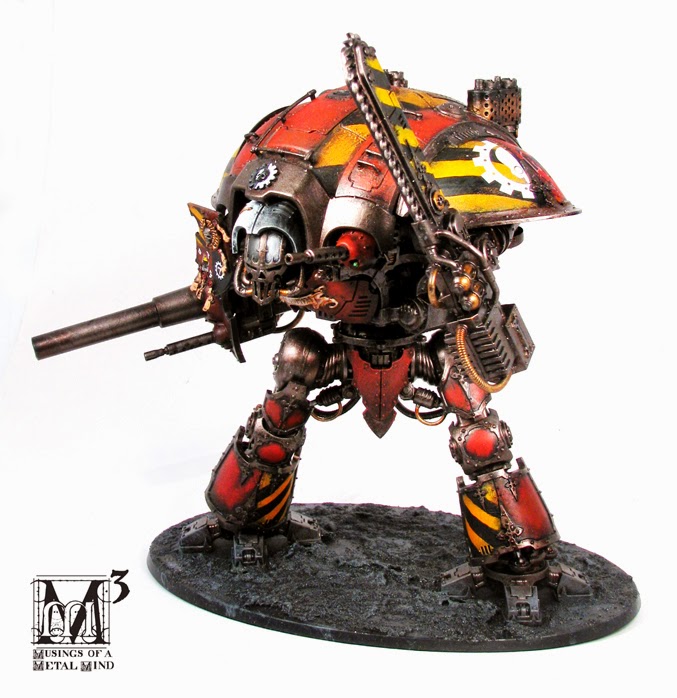 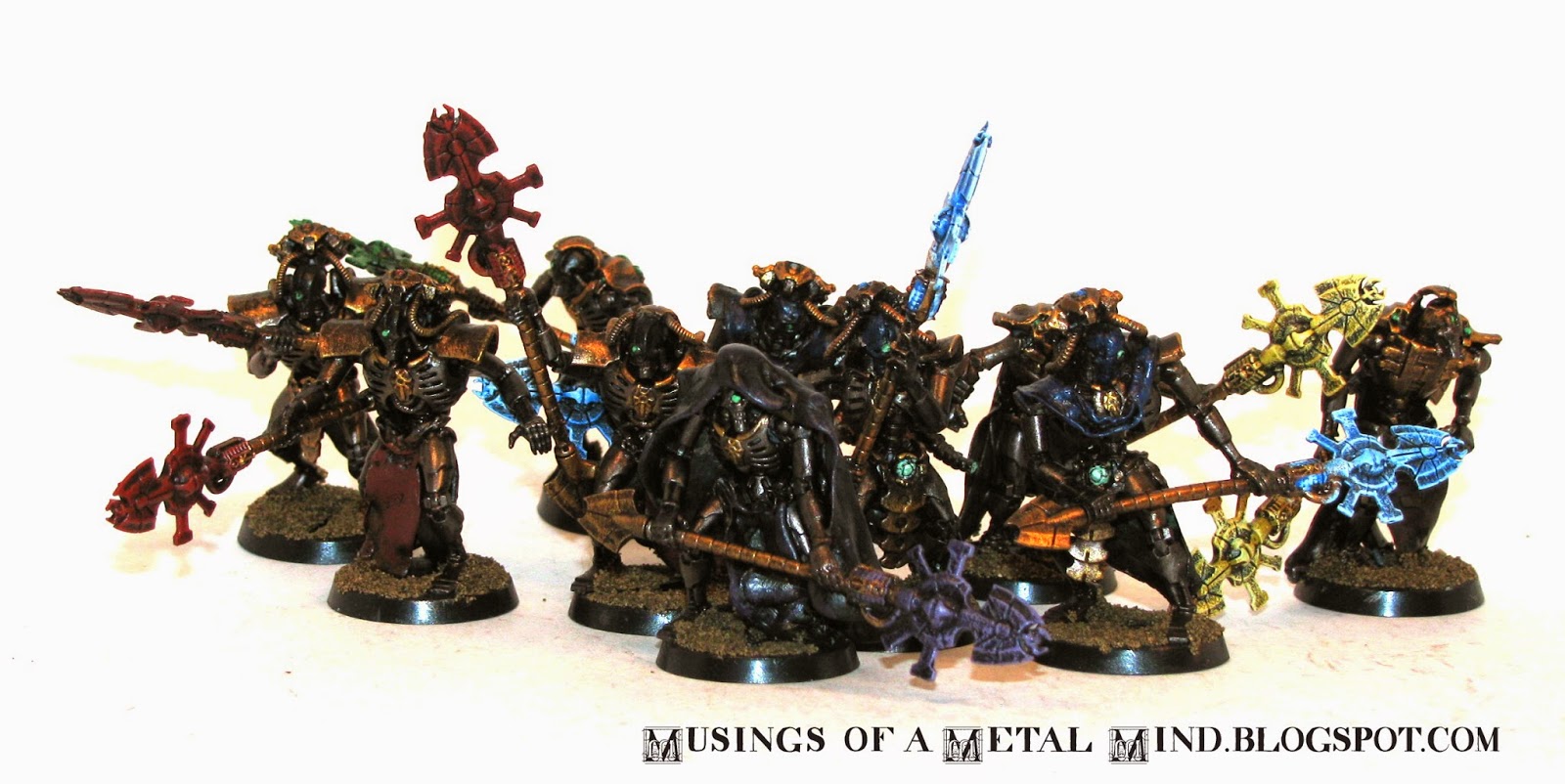 Before we move on to the Knight stuff, photos of a gaggle of themed Crypteks have been fermenting on my hard drive since... well, since that Tomb Stalker post. Then there's the Roboute model, some more Mechanicus stuff, and so on. No, I'm not going to do any ork stuff, ever. I despise the damn orks. Overpowered, undercosted, showing up in hordes and punching my perfectly good Leman Russes with their Deathrollers... ugh. Anyway, let's do some Space Egyptians. 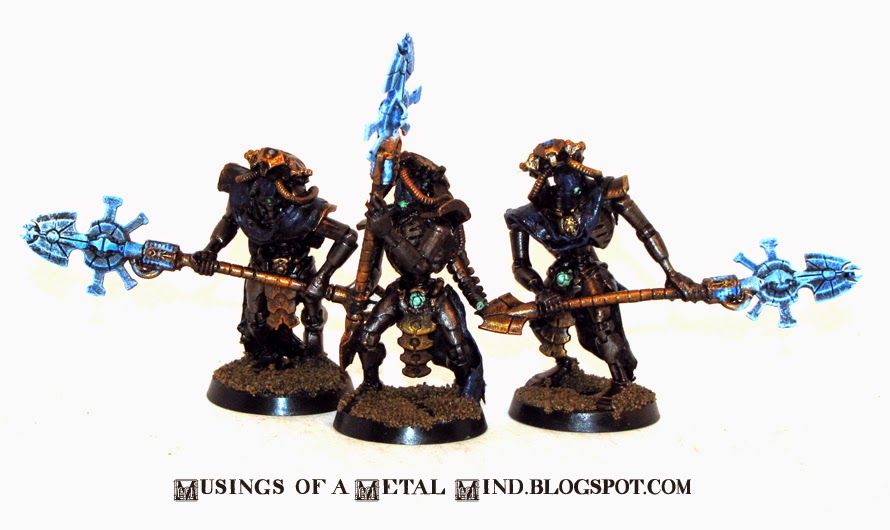 The Storm-teks were my prototypes for the rest of the range. I worked out the color-coding for the different staves early, and figured I wanted different Crypteks to also have subtle differences according to their specialties. These and the Destruction-Teks are all in aggressive stances, and have different cowling than their brethren. I don't know if you noticed, but the staff bits are awfully brittle. As a result, half of these have metal pins in them, and the rest will probably get them after they've been used a bit. 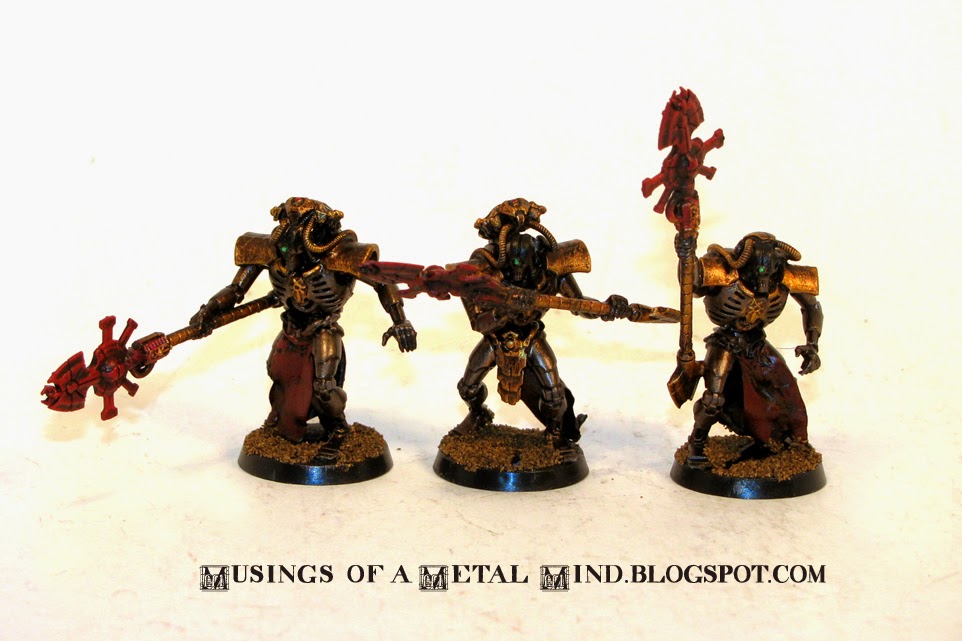 I thought these and the Storm-teks would see more use, so I made three of each and fewer of the others, reasoning I'd use them as rank fillers or one-offs, depending on the type of Cryptek. I wanted to cover all of them for the sake of doing so. 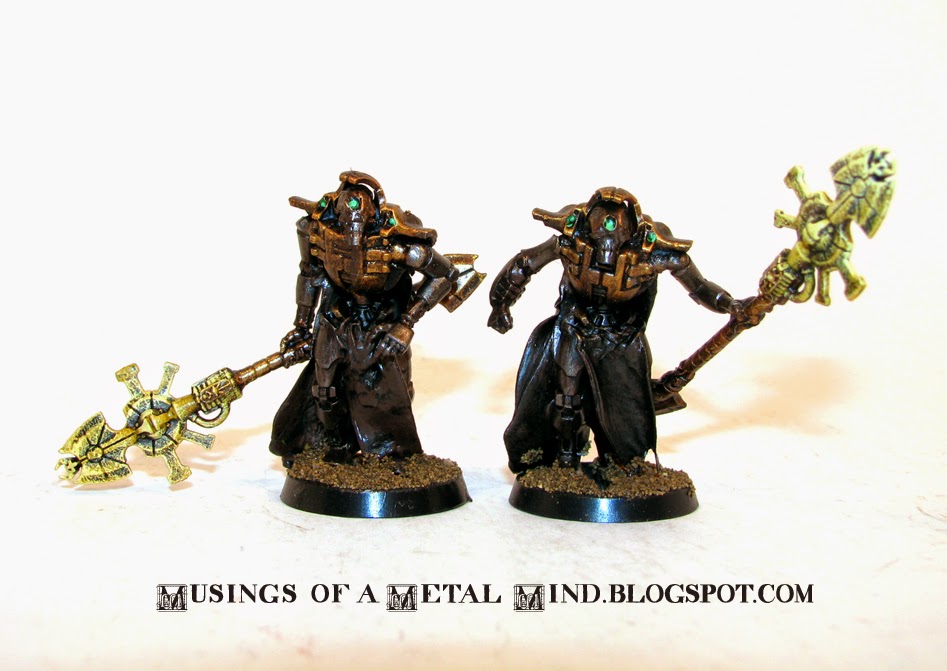 I had fun making the ascetic-looking Chrono-Teks. I was tempted to work-in some other kind of clock imagery, but they're aliens, and so any imagery we equate with time wouldn't fit the branding. So, I made them less aggressive and more scholarly than the others. 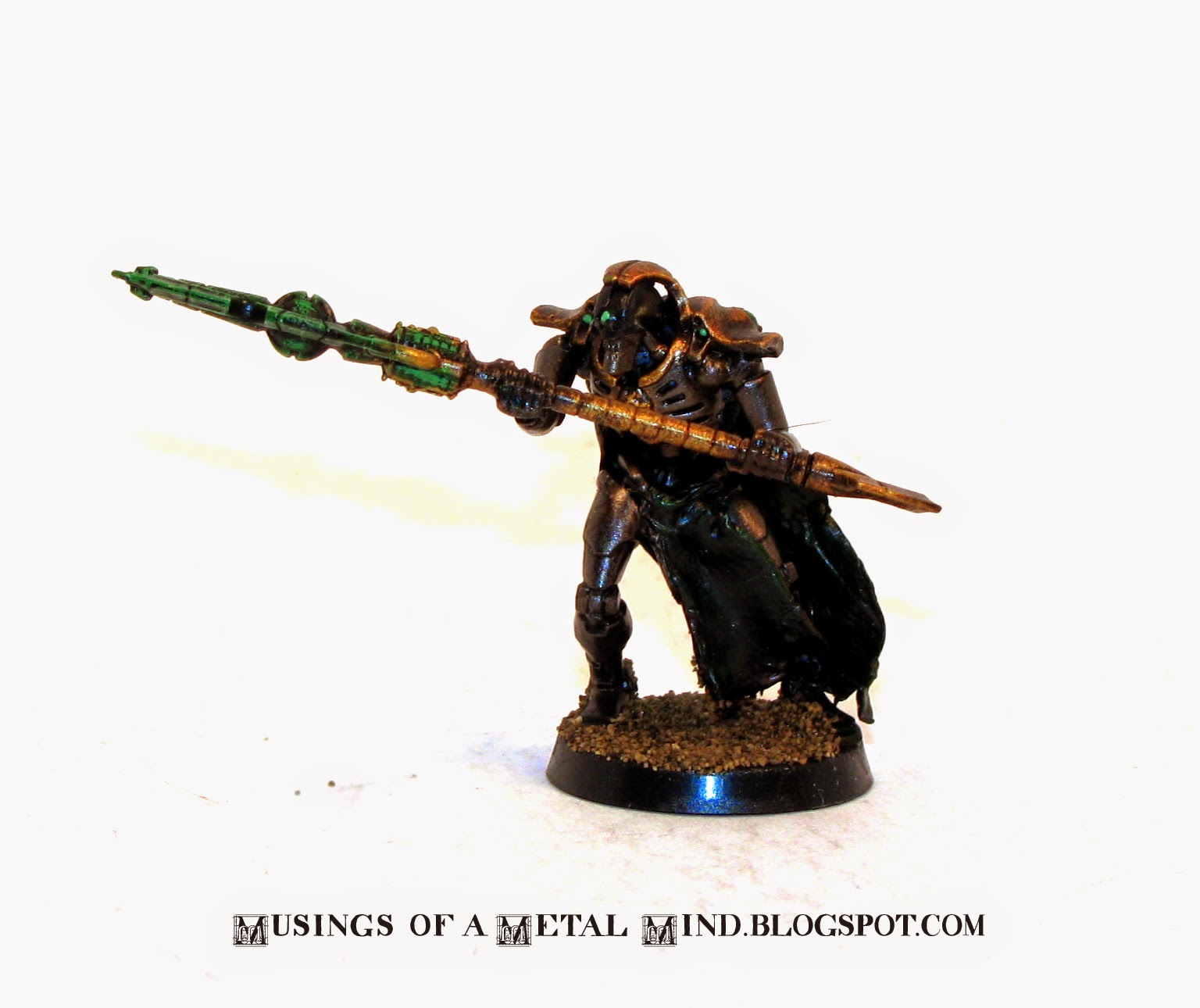 Who knows what a Harp of Dissonance looks like? I reasoned it glows green and looks like a staff. Probably should have made one or two more of these than the others, but I was running out of bits, so... 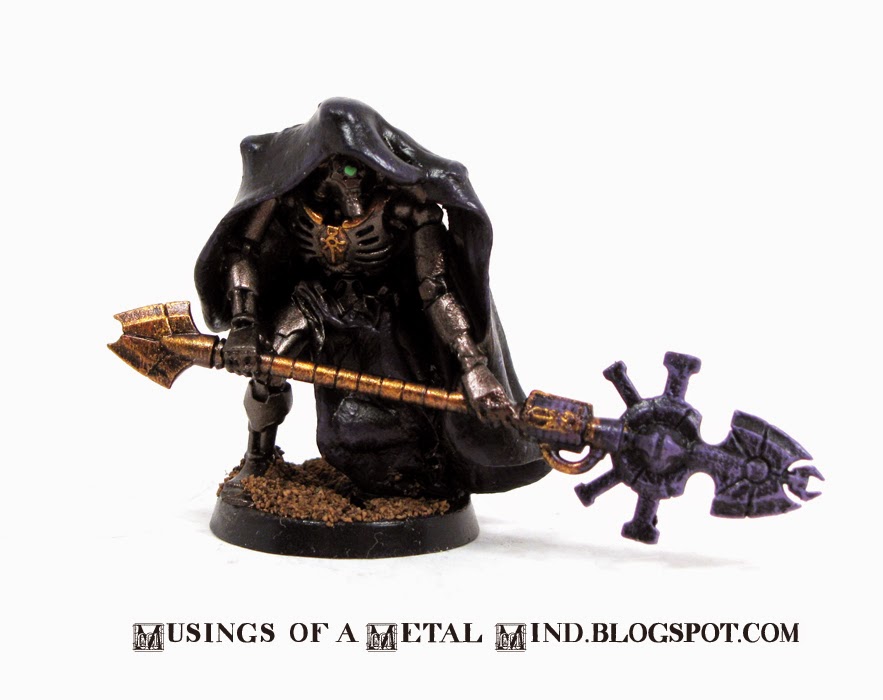 No, the Veil of Darkness isn't literally a veil, I just wanted to give him a dark cloak to play up the whole despair theme. The purple staff didn't work out as well as I'd liked, sadly, but I still think he looks sufficiently gloomy to carry it off. I though about giving him a white skull mask, but that would've been shifitng too far into Nightbringer territory, wouldn't it?

Next time, something big and stompy.