I'm home with the flu today, so here's a post I've been meaning to do.

The larger ships of X-Wing have continued to hold my attention, and being somewhat of a completionist, I've embarked on a quest to add LED lighting, aided by fiber optics, to the ships in my collection. This is not without its challenges, such as taking apart things that are obviously not meant to be pried apart, running optical fibers everywhere, and jamming little circuit boards and batteries into things. I haven't graduated to soldering things yet, but with the limitations of space making Powered Play games products only usable in larger models, this is on the horizon.

You may recall my first effort, the Millennium Falcon's engines and headlights: 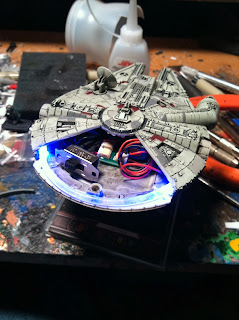 She required quite a bit of sawing, as well as some additional installation to get rid of all the light bleeding around the cracks. In retrospect, I should've done the bottom panel instead of the top one, but overall, the effect is rather pleasing: 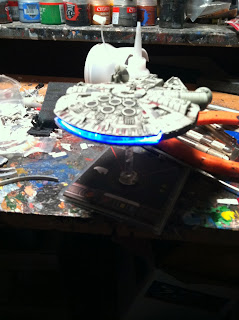 My next effort was both more and less easy; an Imperial Raider Corvette, which I have since christened the Rectifier. 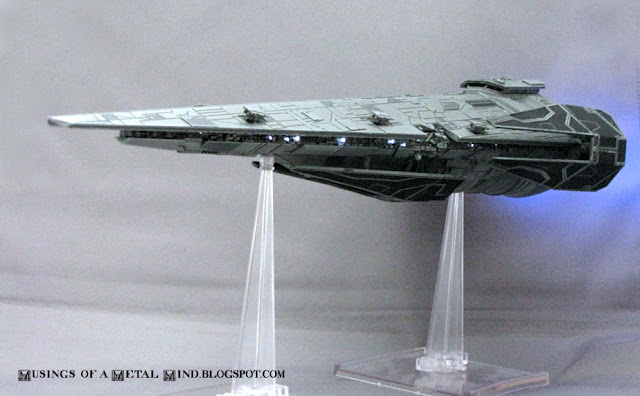 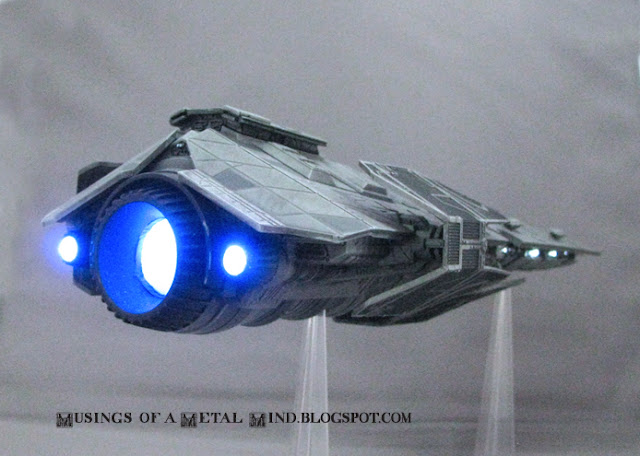 Pulling her apart was an exercise in horror, as I realized too late that her TIE panels were, in fact, clamps holding the top and bottom shells together. Both shot off in different directions before I could realize their nature and function. Luckily, repairs were easy and sturdy.

Her insides are an organized chaos of fiber optics running every which way and taped up LED wiring. I misjudged the fiber's propensity to break once secure by CYA glue, which resulted in a lot of re-cabling and re-drilling, and as a result there are half the number that there should be. There are still a few bits where I couldn't quite get to the old fibers, and the new ones are held in there by nothing but friction. Those illuminate dimly, thanks to light spill from all the working ones. I may yet go back and re-drill them, running their fibers to red LEDs to provide a little light variety. Following on the heels of this project, I attempted another, simpler one: the VT-49 Decimator. Pulling her apart was made easier by an online source, and turns out to be less tricky than you'd think. 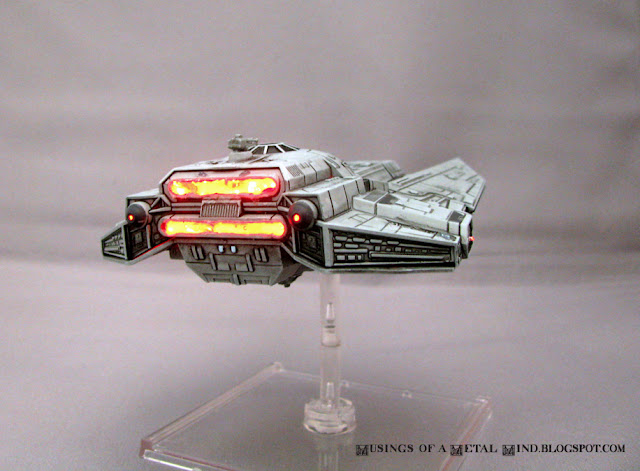 Her engines were filled by way of a hot glue gun, which gives them a weird sort of uneven mottling that I quite like. With the scarcity of translucent sheet plastic (you'd think there'd be more out there besides milk containers....) the hot glue filled the bill, and I had to be careful not to melt the actual model with the hot nub. 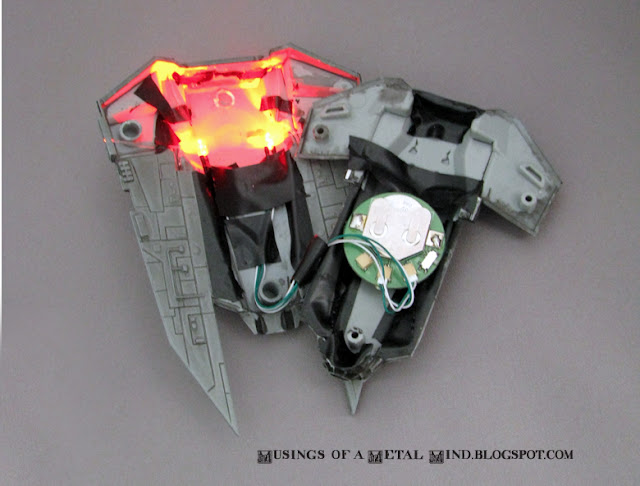 I had originally planned to two-tone the fiber optics running to the doors and front running lights, so the doors could have both red and white lighting, but it was not to be. I was informed by someone who knew better informed that the chemistry of the battery won't support both red and white strands, which is an oddly arcane factoid worth remembering for future projects.

My latest project is the Gozanti-class Imperial Assault Carrier, who will carry forward the lessons learned from the preceding projects. Be warned, modelers, that this thing is deceptively difficult to wrench to intact pieces, and I very nearly broke her keel. Gentle and Firm are two things difficult to balance when dealing with its crazy architecture.

One of the issues I ran into was due to some poor planning on my part; I thought I'd have more white lights running from the board than was actually possible, and ended up having to re-do all of the fiber optics to both halves of the wing hull needed only 1 light each instead of two. This proved to be a boon, as it lessened the amount of crap that had to be crammed into a relatively flat area. You can see how insane it looks. Some of the fibers bent too far and lost their conductive ability. Most of them are fine, however. 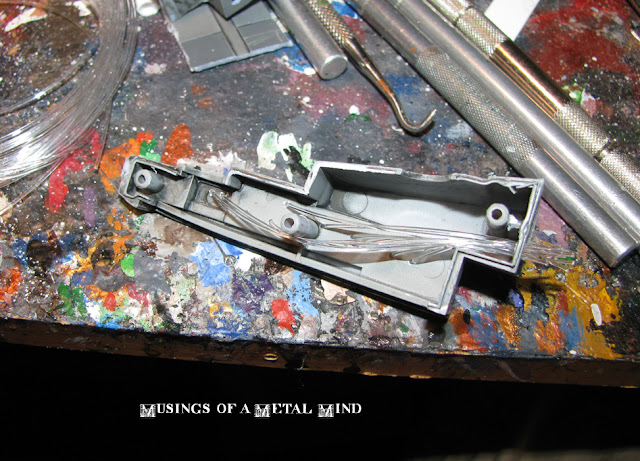 Another issue is all of the crap crammed into the upper hull. Managing the wiring isn't easy in such a small space, and made less so by the different areas it has to funnel to. Added to that are the concerns that nothing can be made permanent because you have to be able to change bad LED bulbs and the battery.

One of the protrusions on the side of the hull was the perfect size to accommodate the switch, too. I'm glad that Powered Play switched to these instead of its old huge clunky switches which, while great, were impossible to embed in a notch like this.

If anyone's successfully done either Outrider or CR-90, let me know. The GR-75 Rebel Transport came apart easily enough, but the damn Outrider continues to confound me. Slave-1 and the Lambda-class Shuttle came apart easily enough, but I have yet to find a plug/play solution that will fit their tiny frames beyond a battery stuck directly to a light, which may result in my first foray into soldering. (gulp)
Posted by Mark at 8:24 AM 8 comments: 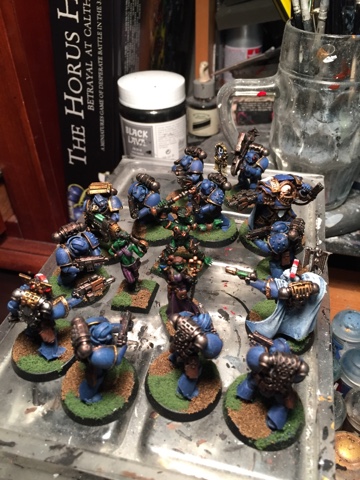 "Sir... These orks appear to be female.."
(Or, what happens when you paint multiple genres at once.)
Posted by Mark at 5:25 PM 1 comment: