After a Short Hiatus....

Yes, I've been silent for....hrm, I s'pose it's been months, and outside, the world has kept turning despite me.


THE NECRON CODEX IS DIFFERENT NOW.

You can't find Tomb Blade models anywhere, because they're are now AMAZING, but not to worry, no one in the right mind is using or will ever use Lychguard and Triarch Praetorians. Destroyers are now Jet Pack Infantry, because why the fuck not? Oh, and their great transport planes and HS gun batteries now cost too much ("Oi, we're selling too much of these 'ere crescents, mate! Better make 'em overpriced, wot?"). But hey, on the bright side you can get 4+WBB saves for the low, low price of building a formation cookie-cutter army (or, at least including the we-know-they-suck-now-so-here's-a-reason-to-take-some Crypteks), so that's something. Oh, and most of the great playable Character Necrons... aren't all that good anymore, so you might as well buy other things on the  list.


As you can no doubt tell, what I'm most pissed about, besides the fact that planes and barges got a cost/equipment nerf, is that colorful Crypteks have forgotten how to use other things but their bog-standard Staff of Shame and other pathetic gear.

Maybe mine will go back to being Tyranids. I dunno.

THERE IS A MECHANICUM CODEX NOW.

Well, there was one, a 30K one, and it's.... interesting, being almost entirely Legio Cybernetica. Interesting enough for me to have bought into them (more on that in future, I swear) But now there are actual Skitarii (thanks GW, I already several squads of them) complete with a crab tank:

That's right, it's Mr. Crabby, right down to his little googly crab eyes. Turn to pages 34-35 of Codex Skitarii, and you'll see their is painted in grey as well. Jerks.

Though, to be fair, I did base him on this thing.

But I painted cogs on mine first. Included him as a counts-as Leman Russ first, too, so there. Now I only need two more stock ones to have a Crawler battery that gets a 4+ force field save. And, they're a mere 90 points a pop, same a the old Annihilation Barge--HEY WAIT A MINUTE!!

It is interesting that I made these at the time when in a Necron list as barges they were 90 points a pop, and now the AdMech crab tanks are also 90pts (don't get to used to that).

Oh, and P.S. they also have cavalry with taser lances, spider-ninjas and other things, because why the hell not.

The codex isn't a complete one, though; there are four infantry units, two of those Sentinel looking things, a crab tank and and no HQ, so really Codex Skitarii needs to be combined with, say, the 30k stuff from the HH books to make an actual, usable, Mechanicum army.

Dear God, with the HH-era HQ's,robots, transports, knights, and tanks, you've got yourselves one hell of a fighting force now, don't you? Huh. Sun sets but it also rises, eh Games Workshop? Speaking of sunsetting things.....

(Is it ironic that those are Rackham dwarves, and the Frenchies went tits-up long ago?)

GW said "HAHAHA Fuck you!" to its smaller swords-'n-sorcery audience and blew up the background universe it didn't know what to do with, along with the game they didn't know how to save. All they had to do was advance things a little, maybe a timeskip to the 18th century or something, but oh no, now it's all Chaos wins, game's over, blank slate. With all their fluff, they wrote themselves into a corner, and the only way out they saw was to knock all down.There are hints all over the new 40k books of this same thing on the horizon, campers. Just you wait and see.

So, I have a samurai dwarf army for sale. Maybe some undead and skaven to follow. Let me know if you're at all interested. There are all sorts of Rat Ogres and things. Pics to come. 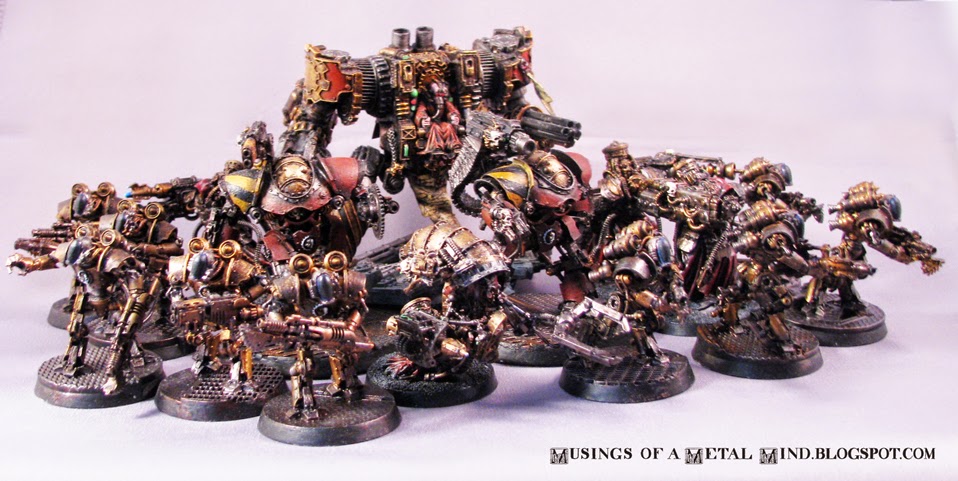 Lots of other things.