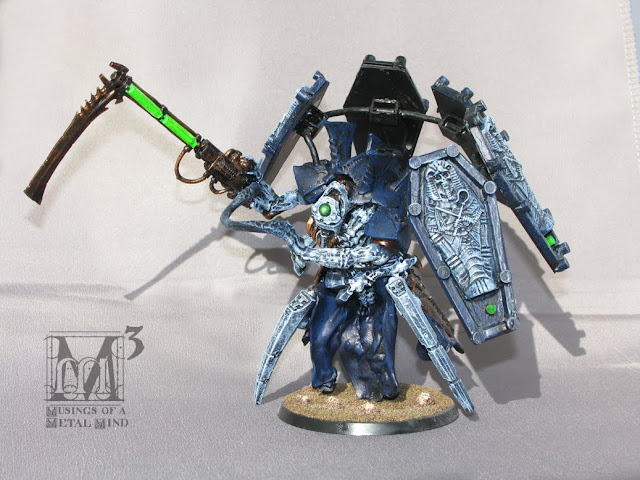 Bit of a mea culpa here. I've actually had this model complete and ready for quite some time, and just never bothered to photograph him.

So anyway, yes, he's named after a Final fantasy 6 character, and yes, his sniper's shield cape comes from a Persona 3 character. A rather neat combination, wouldn't you say? 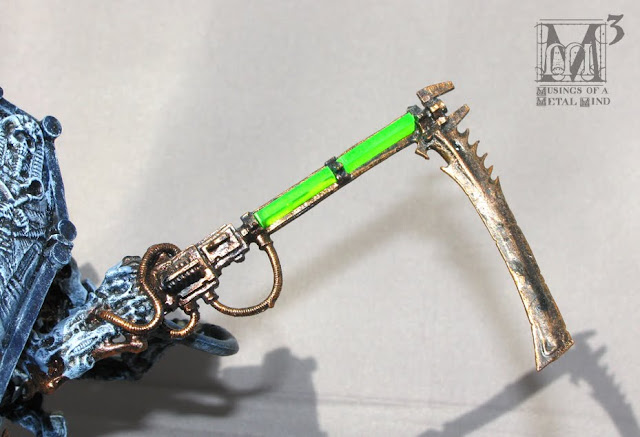 I featured this scythe in a WIP post, and to be honest, it was ready far before the rest of the model was. It would've snapped into a million pieces had it been made of, say, plastic or resin, but thanks to the all-metal frame it survived quite a  bit of bending, drilling, and general manhandling. 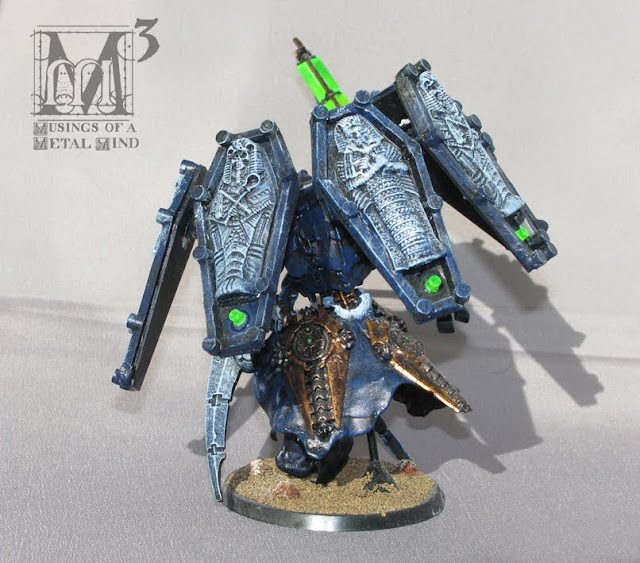 I always liked the design of the Thanatos from Persona 3, but never found a way to incorporate it into a character miniature before this one. The sarcophagus lids are from Reaper miniatures, bless their bits-friendly hearts. I had thought to give him horrible organic spreading wings to tie him more into Deathgaze, but this seemed the more Necron way to go. 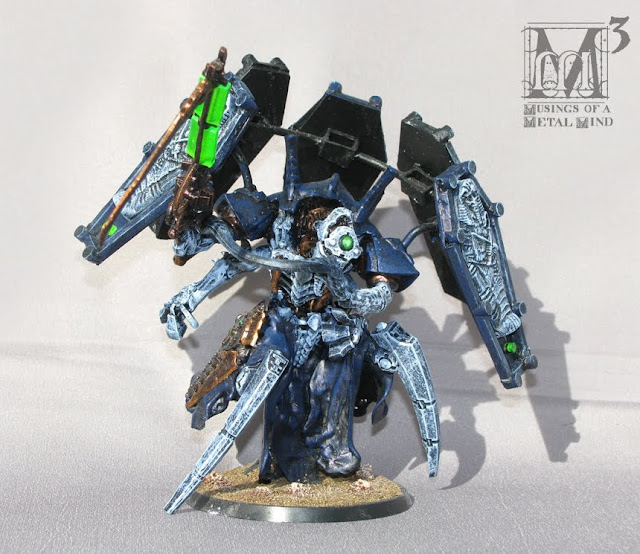 I suppose I should have named him "Thanatokh" or something, but with that big cyclopean eye, "Deathgaze".

I suppose, like Grievous, in addition to just being used as a Transcendant C'Tan, he also deserves an entirely for funsies character profile:

Wargear:
The Scythe Invictus Mors: Invictus Mors is the ultimate weapon of war, crafted by Death itself and given to Deathgaze just so he could show up General Grievous, because the wily son of a bitch keeps escaping his own certain demise through various schemes and generally cowardly acts. That he doesn't have such a great piece of kit honks the good general off like you wouldn't believe. This pleases Death, and makes Deathgaze very happy. It has two profiles.

As a melee weapon it doubles Deathgaze's strength attribute, and may be used either against a single target for Deathgaze's maximum number of attacks, or Deathgaze may make a single attack against every model in base-to-base contact. If Deathgaze hits, remove these models from play.

As a ranged weapon, Invictus Mors has the following profile:

Invictus Mors may be fired in one of two firing modes: Single and Death Ray.

- In single shot mode, Invictus Mors is is a Heavy 1 weapon. If you miss with a BS of 12     you have no business rolling dice.

- For Death Ray mode, designate a point within 48" of Deathgaze. Roll 5D6, find something that long and 2" wide and lay it down on the table. evevything above or below the line is hit.

Necrodermis Mortis: Deathgaze has a 2+ armor save. Rolls of 1 must be rerolled.

The Bastion of the Dead: Given Deathgaze by the great death lord Nito, this immense shield was made from the sarcophagus lids of the nine previous Lords of Death, and grants Deathgaze admittance to their monthly card game. It also gives him a  2+ invulnerable save, and allows him to redeploy himself via Deep Strike once per turn, during either players turn, at the beginning of the movement phase. He may assault on the round he does this. Furthermore, it gives him the Shrouded and Stealth rules.

The Blades of the Arkhanus: Deathgaze replaced his legs long ago with these because he felt they looked cool. He moves in a skating motion that crackles with cold energy, producing a high-pitched squeal that draws in his minions like carrion birds. Deathgaze may move 18" in a single turn, ignoring terrain and other models. If he does this, the nearest unit of Deathmarks (yes, even if it's 52" away) removed from the table and deployed within 6"of Deathgaze via Deep Strike. No buts.

Master of the Deathmarque Guilds: For every maximum model number Deathmark unit you purchase, you may purchase an additional one at zero cost. Any Deathmark unit entering play via Deep Strike does not scatter. Deathgaze's presence makes the Deathmarks so anxious to please, that the Hunters From Hyperspace rule remains in effect for the entire game instead of just one turn. Furthermore, at the beginning of the Necron player's turn, a unit of Deathmarks at less than full strength may be removed from the table. During the movement phase, that unit must be returned to the table via Deep Strike at full strength. All Synaptic Distintegrator weapons gain the Armourbane rule, and their range increases to 36".

Death is Fickle: If an independent character is wounded by Deathgaze, roll 3D6. On a triple 6, that character is unharmed.
Posted by Mark at 1:51 PM 2 comments: 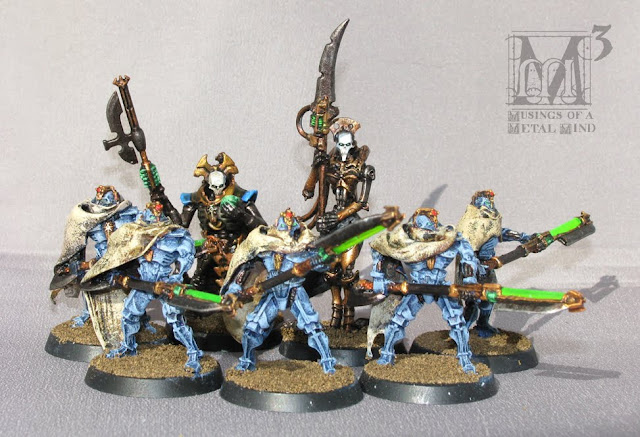 I teased these a while back and only recently got the free time to shoot them. This little group all happened to be assembled and painted at the same time. After seeing a vintage metal necron lot on ebay, I had to pick it up, and as a result added some much need scythe power to my army. 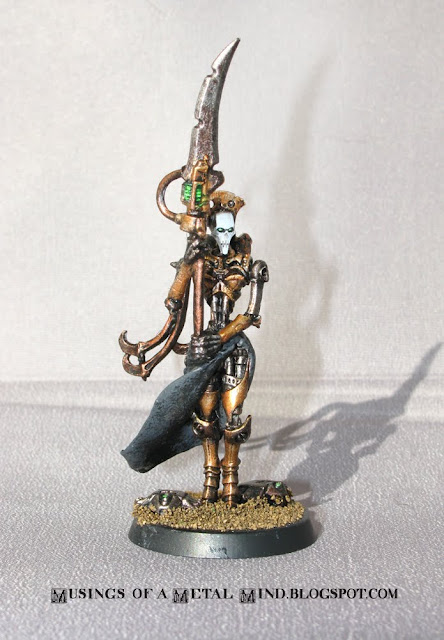 Nehekhara here came from my wanting to use Anrakyr in a battle (not to mention my regret at never having purchased a WHF Tomb Queen) , but not having a mini for him. After experiencing the Failcast horror of Trazyn and Orikan, I wasn't about to go seeking out another rubbery horror. So I bought a PP Tomb Maiden (how apt!) and converted this imperious beauty. I shaved down the features of a stock Triarch Praetorian, narrowing the jaw a bit and accentuating the cheekbones.

I don't mind that she's rather tall and lithe compared to other Necrons, because I imagine the Cryptek that crafted this shell for her was probably in love with her. Plus, being royalty she would've wanted to not only preserve her beauty, but look down on her subjects for all time. Imagine her anger when she woke up sheathed in cold metal. The poor fool that did this to her is probably scrap by now. 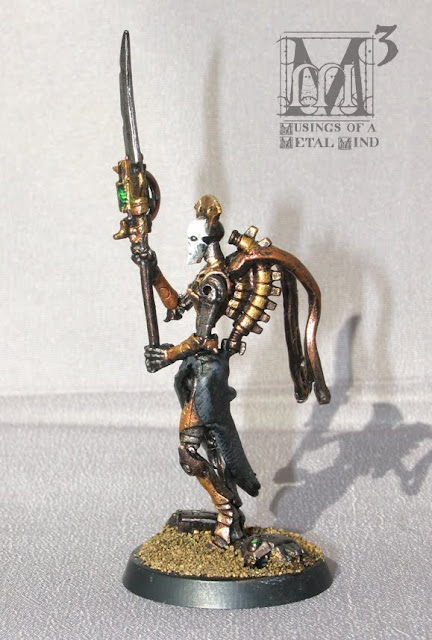 She looks rather more like Imotekh in this pose. The PP base model took some reposing and a lot of pinning, and is terribly fiddly. Nonetheless I still prefer it to anything made out of that horrid resin. 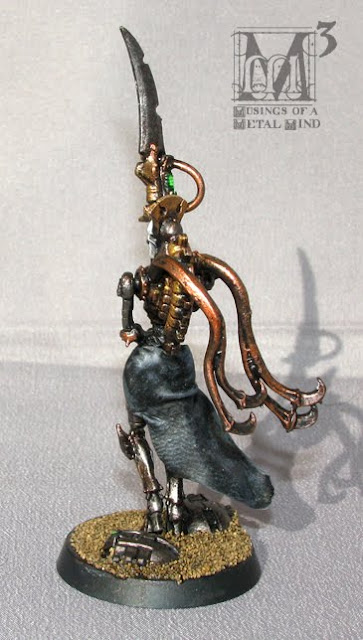 Those whip bits are courtesy of the Hive Tyrant that became my General Grievous. Combined with the skirt (which was almost bright blue) and an extra Destroyer spine, I think it lends the model a nice John Blanche-ian look. I found some of his Necron sketches recently, and in the future might attempt a model or two based on them.

Now mini-Grievous need not fight alone, thanks to his trusted Magnaguard. I didn't pose them with the Hive Tyrant C'tan sized version because they are, of course ridiculously small to be guarding him at all. Maybe if they were 30mm scale like the  Knight Models versions, but certainly not these.

The original Pariah models were quite boring, and the capes help immensely. I thought about re-doing the heads with goggle-eyed robot ones and headscarves to match the movie droids, but then they wouldn't have gone with the Necrons. As you can see, these match up with mini-Grievous and the rest of the nobility quite well. They came out a bit too light blue, though, but oh well. 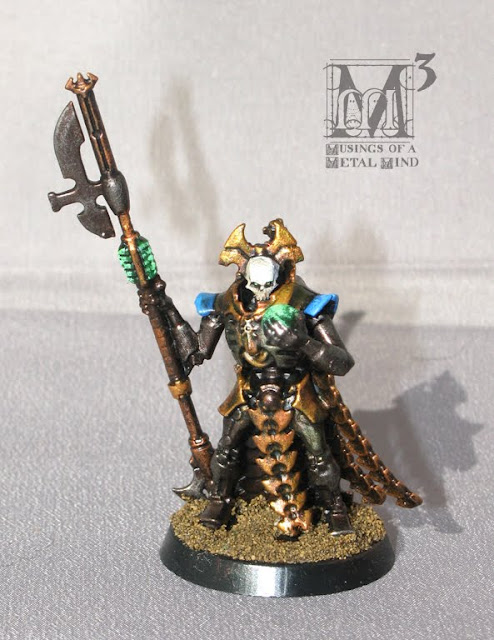 Lastly, a stock overlord to serve as a lackey for Trollzyn Trazyn, and therefore painted with matching accents. Really, he could accompany any other nobility (like, say Nehekhara) that happens to need someone to kick around.

Next time, something much, much larger.

Merry Christmas everyone!
Posted by Mark at 11:24 AM 2 comments: