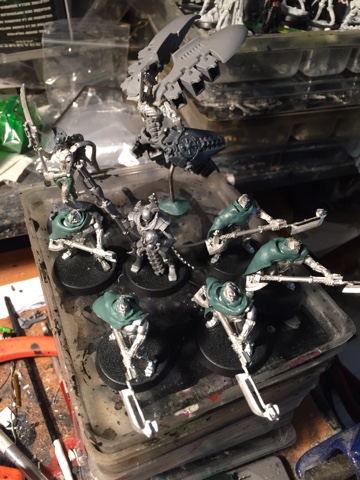 Necrons: A little expansion of the ranks....


These days all the buzz is that the sky is falling, GW is in free-fall, 40k is collapsing, and lots of other doom and gloom that point to changes on the horizon, and not necessarily for the good. All fretting and wringing of the hands that has been, quite frankly, done to death.

So of course, my group planned an Apoc game for which I dusted off some unassembled Necrons. The resulting frenzy of assembly was quite cathartic, considering the short hiatus I'd taken from hobby things lately. 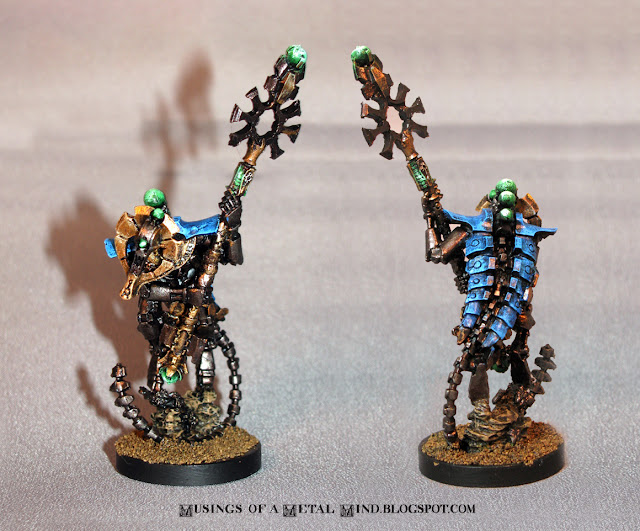 Orikan and his buddy Trazyn I bought for a song. There's no way I'd pay full price, ever, for this absolutely shitty resin. If anyone at GW reads this blog, please spearhead an initiative to get the characters either A) cast in metal, or B) out of some better resin. Whatever moron looked at the first samples of these things cast in this shit and stamped them "approved" should be boiled in his own pudding. I like the Orikan model, but I'm sure I'll be repairing that staff (which I already had to rebuild out of bits and green stuff) and tail soon.

Wait, why the hell does he have a tail? 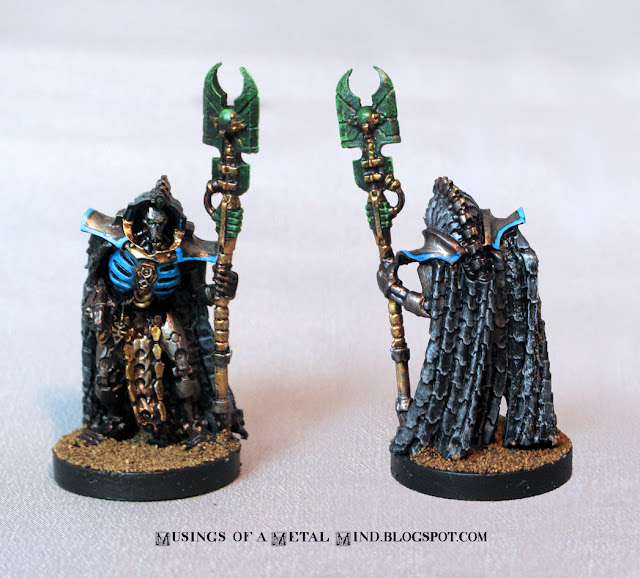 On the lighter side of things, in a game that will inevitably involve pie plate templates removing lots of things from the field, my hope is for Trazyn (or Trollzyn, as he's known) here to confound their efforts as long as possible with his body-swapping and empathic obliterating. We'll see if that combined with Orikan's hulking out will win the day. I'll just be happy if they both survive being transported intact. Necron characters, are of course, one of the good things to come from the First Great Revision, even if the Second Great Revision made them.... not as good as the first. Rest in piece, Fat Ward. 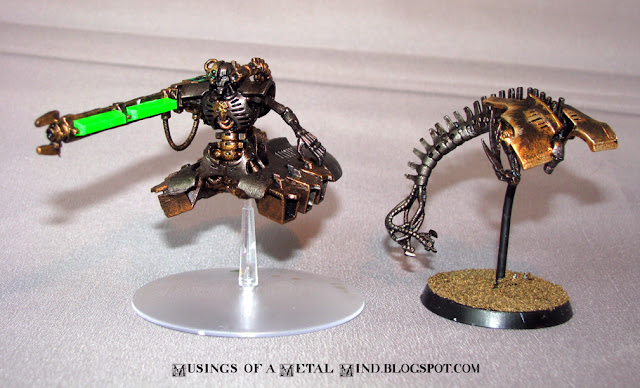 I'm sure I'd had a plan to turn these two into something else. Why else would these two lone fellows just be sitting by themselves for so long? Also, you'll notice the heavy destroyer is the only thing in this mob of 'crons with glowy green rods. GW, these are what made the Necron line look really, really distinctive on the tabletop. What idiot convinced you to do away with them in favor of these:

Those plastic rods are absolutely wretched. Yes, you can paint them up to look nice, but they don't catch the light and glow like the old mk.1's did. This is indicative of the larger trend coming out their minis design shop: over detailed with zero character. You know what had character? All the things they did in 1983.

Yes, those Immortals do have Warrior chests and transplanted spines, as what I'd bought the two boxes for in the first place were these:

In a game about 3 weeks ago, two of them held up an entire space marine assault squad for 3 turns by refusing to die. It was quite amazing. Yes, I'd proxied them while having the unassembled kits all along. I didn't green the barrel inserts because they aren't gauss weakens, even though I did give them the obligatory green energy vents.

You know what even Bandai is doing now GW? Option packages. If you were smart, and wanted to make money, you'd put out option kits containing what the dual boxes were missing, so all people would have to do is buy the kit box and the option box and they have both units. This is why eBay resellers are making money and you're not. 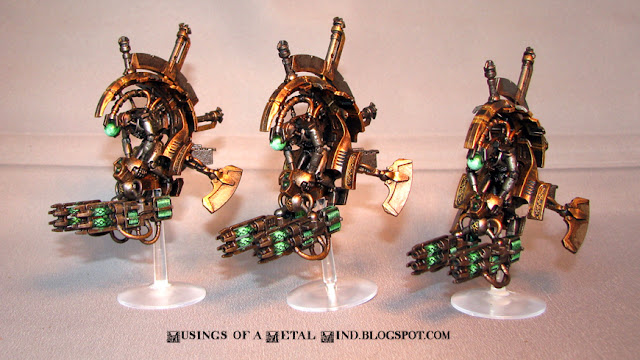 Remember way back when I posted about how Ghost Arks were an excellent paragon of a kit? Well, the Tomb Blade is quite the opposite. I'd planned a separate post on these, but instead, I'll just get my rant out of the way here.

On the one hand, I quite like the radiating spines with spikes motif the top 2/3 of this has, but on the other hand, the tacked-on cannons are like a hasty finish to a promising drawing. It's like the guy had this orb, and it was great, but he then didn't know how to finish it off or what it, in fact was, until Fat Ward came trundling up behind him to say "Whatcha coin? Oooooh can it be a jet bike? Put some guns on it!" 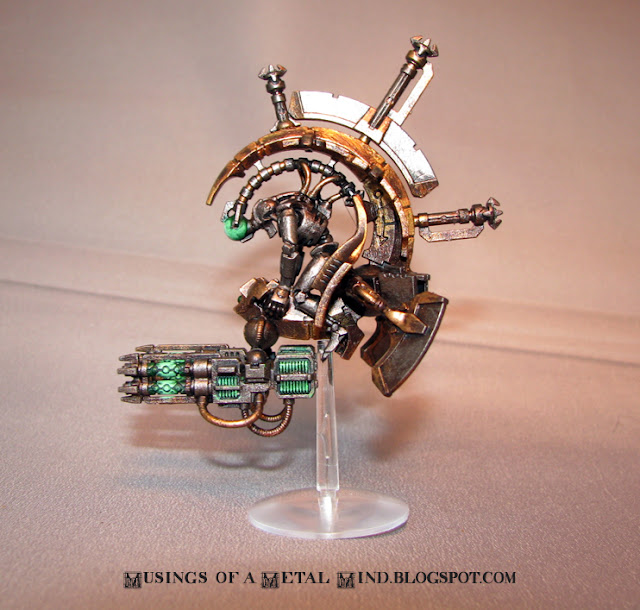 In practice, it's in infuriating piece of shit that embodies all of the worst things about the new design philosophy. It's covered in detail which you then further cover in detail. (an offense to be further repeated in the new Ironstrider kit) No glowy rods were some should be, overly fiddly small bits (separate spinal cables? Are you mad, GW designers?) that just plain are poorly designed (shield vanes with tiny, tiny contact points, and they're in 2 even tinier parts!). The end result looks like a chunk of a larger kit they just couldn't be bothered to finish. Here's your insanely delicate spiny cockpit orb for your...thing. (a 5-man Ghost Ark? A Triarch Stalker? Who knows?) Oh wait, let's put some cannons on it. (sigh) I may just sell these three and go make some different mecha-bugs. Or more of other mecha-bugs. God knows more of these kits would just be flogging myself.

To boot, it badly fills a role that the old mk1 Destroyer did quite well. Really, all they had to do was keep the mk1  stats (jet bike, S6 AP3 Heavy 3 gun) and add the Tomb Blade's options (especially nebuloscopes. Mmmm!) and you'd have had an excellent unit. The Second Great Revision requires you take a squad of these to get the good Decurion, which seems to be The Great Plan to Sell Models 2.0, subsection Everyone Has Destroyers, Here's How We Sell Them Something Else.

Make no mistake, these trends are bad, and they're not just limited to the Necrons.

Maybe the sky really is falling. Maybe it's time to throw in the towel and evolve to another hobby.