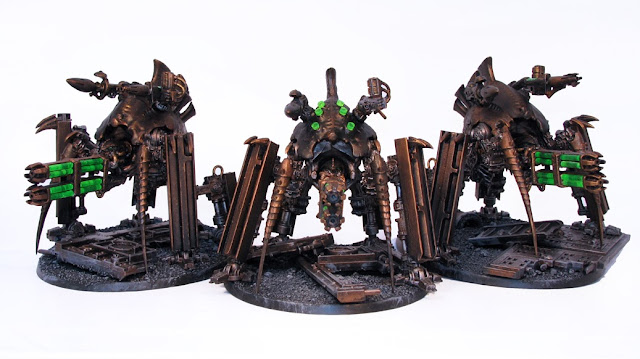 I struggled with this one. I really did.


If you recall, my Tyrannos were originally going to be an attempt to resurrect the "Death Barge" concept from the old GW sketches. That idea got scuttled when the only dino ribs I could find at local hobby shops were either enormous or far too small (I still want to build a Death Barge though; maybe I'll just make a superheavy one)  Thus, I fell back on the tried and true (not to mention readily available and cheap) Carnifex chassis. Now, when you use the same parts, you risk things coming out the same, a trap I definitely didn't want to settle into. The other problem was the enormous gun, which had to be Necron-flavored.  The prototype had two double-thick legs, a big double-barrelled cannon, and looked like a cross between Metal Gear Ray and a turkey that really, really had to take a shit. 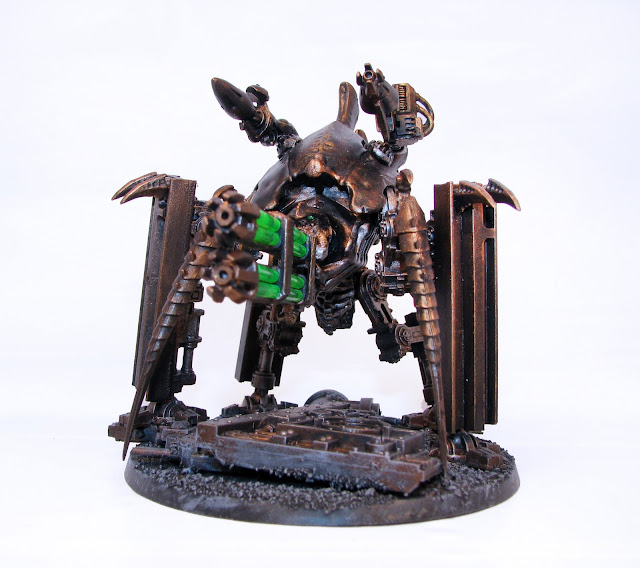 What came out looks like it should have been chasing down Gelflings in The Dark Crystal and blasting them to atoms. I had already built three head/gun combinations with the guns side-by-side, like enormous tusks. I wouldn't have been able to put green rods on the inner bits before painting, and from the side they only looked like one Heavy Gauss cannon; pretty underwhelming on such a big model. After a lot of hemming and hawwing I ripped one apart and put it in a derringer-style over-under config that looked so imposing I remade the other two the same night. I had to bore into the Carnifex torso to set them in, but once I did, they were solid, and, as is the case with other models, this one started to build itself after that. 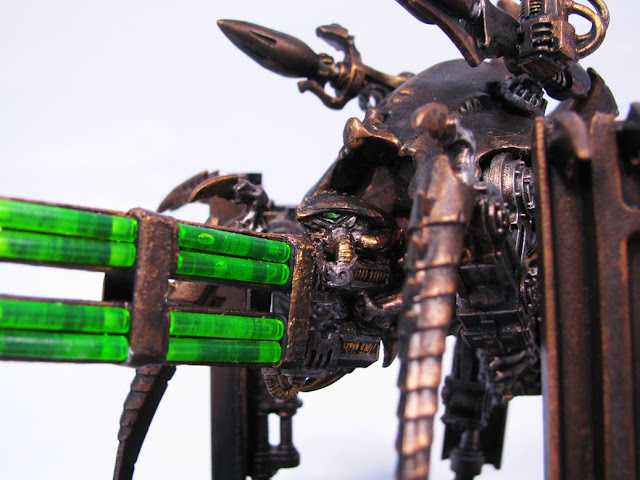 The head is from a plastic Cryx kit secured with some Dragonforge white metal power cabling. As for the secondary guns Gauss flayers were way too small (see the Tomb Stalker) and I had these Eldar bits lying around for what seemed like forever from a bits lot. The clawed missile launcher meshed with the "salvo" part of "stinger salvo, for me, and the other gun is my stab at a Necron template weapon. Those gimbals are the little mounting points from Tau drones, reinforced with some metal rod. They fit right into the notches on a Carnifex carapace with no trouble at all. 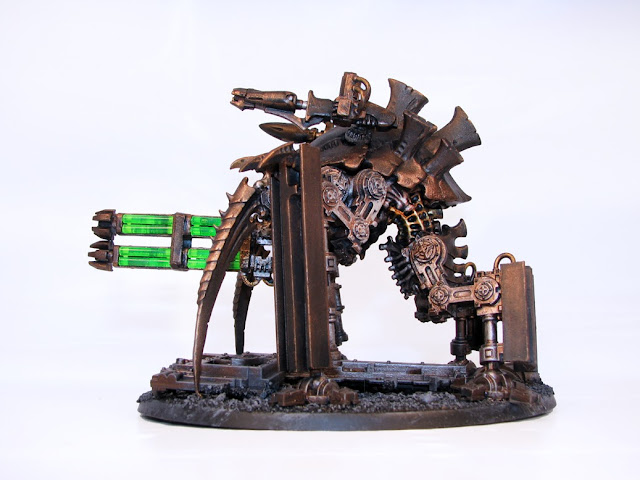 If you click and zoom in you can tell just how far back the gun mechanism goes. Originally the legs were all going to have curved carapace armor on them, but my mock-up simply didn't look heavily armored enough, so I settled on the huge i-beam shields instead. After all,  as with the Tervigons and their armored gate generators, once these monsters get to be a certain size, they start  picking up the slab-sided aspects of the Monolith. I had also wanted the middle legs to be swung out to the side more, as on insects they're responsible for shifting the creature's weight. The reason they're mounted forward is simply to make the monster look more imposing, not to mention shield the body from incoming fire as it blasts away. 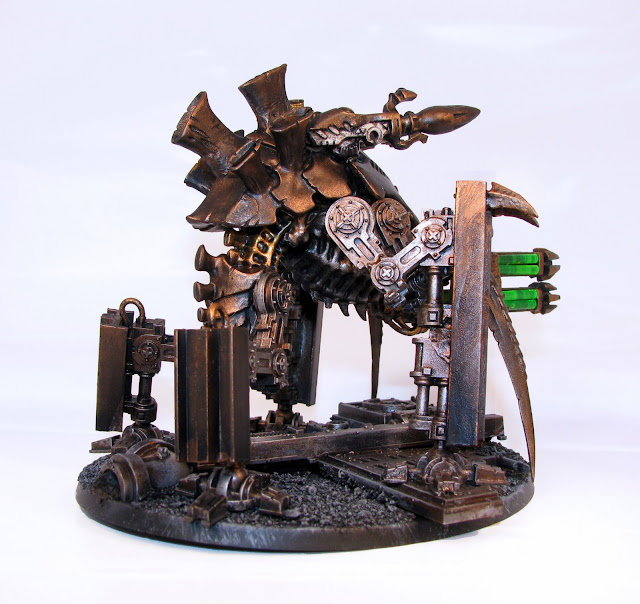 I noticed a number of things after the frenzy of building/painting was over. One of them is the huge block of nothing in the middle of the back of the big middle legs. I should've stuck some more power cabling in there. Likewise the eyelet in the mounting point on the stinger salvo launcher. What I am enormously happy with is the triple row of exhausts down the back of the monster. I thought about carrying down another stabilizer strut from the nub left by the tail, but my early mock-up looked like it was connected to the ground, so I left it off. 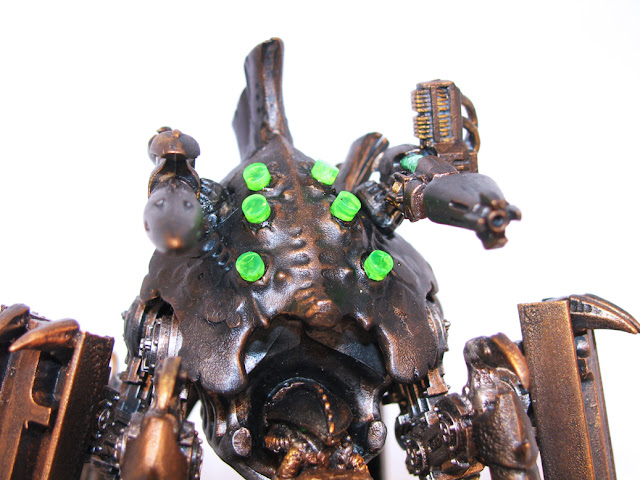 I also only had two plain carapaces, and rather than leave it with holes or green-stuff ridges, I decided to make one of the Tyrannos a "command tank" type with extra optics above his little head. If you zoom in and look at the carapace and the side of the i-beam, you'll notice a kind of stippled bubbling. That happened as a result of the primer, and although it's usually something you don't want (and should sand out), here it made the bits look like extra-heavy, rough-surfaced metal, so I welcomed it and drew out the detail with some careful drybrushing. 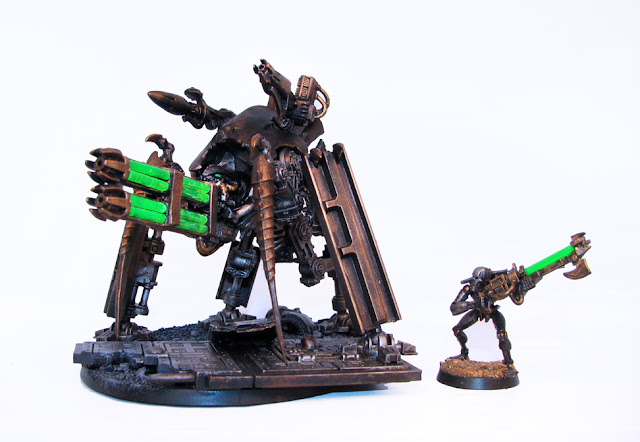 Yeah, there's some envy in the ranks now. Sorry little fella. The middle legs on a couple of models were even wider than the already-wide oval base, so I had to stick some flooring on there in order to base them properly. I ran out of forlorn looking skeletons, though. Maybe one of these days I'll find some terrified Imperial citizens to base with. 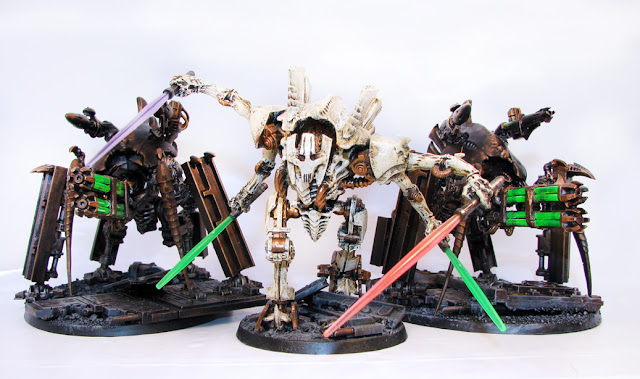 It's too bad you can't buy them in squadrons, like Carnifexes or Leman Russes; Grievous could join a brace of them and stomp around the battlefield killing things. Oh well. He'll have to settle for terrifying people by himself. I really should make him some Tyrant Guard flunkies, though.

I erally liked the use of tyranid parts, painted with metallics. They look awesome!

Sorry that I'm late to the game...are these counts-as tyranids? Fantastic!

@Zero: yep, these are counts-as Tyranids. Wecome to the game :)

The guys and I at work are blown away as usual. Always a hilarious read, too.

Very, very nice. I wish we could work on an army together! Or at least a gaming board...

Absolutely awesome work - these are some of the best yet! Can't wait to see what the next monstrosity may be. Keep up the great work!

@Nesbet- that's one of the reasons why I started the Tyracrons in the first place (even thought the codex was nerfed). The parts just looked good in metal....

@ Dan- I do love working on terrain. One of my first projects, back when I was playing fantasy, was a set of buildings for a dwarf town.

@ Mordian7th- I might have to shift back to Admech or something else; I seem to be rapidly running out of monstrosities from that codex.

The only thing left, I suppose, is to start taking the monsters to tournaments and losing to some real players. Then again, I have a lot of heavy-duty models to shoot things with....

Have I mentioned how freakin' genius I think you are?

Disgusting. In a great way. As in, "Man, it's disgusting how talented that dude is."

Wow, just caught the link to here... Absolutely awesome looking models, really original, Never would have realized that 'Nid models could look so good in metallics and mesh so well with robotic parts.

Great job, makes me feel bad about my own lack of originality!

@ Atreyu: Don't feel bad man, get inspired! The 40k universe is big enough to have room for lots of inspiration, so why not let your imagination run wild with a hobby project. Like mine, it could be the jumping-off point for a great new army!