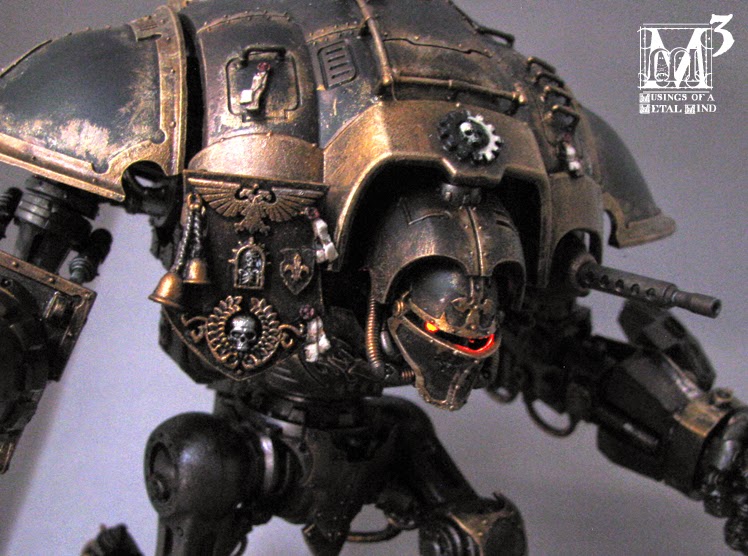 So this one was a long time in coming. I have such a backlog of models to shoot and put up, you wouldn't believe. Add to that my old homemade lightbox bought the farm, so I thought "hey, let's order an actual one!"

Oooooh the problems this caused. I'm still working on getting the lighting right, so if some of these shots are a little off, please forgive. I'm working under entirely new conditions, and really, I just want to junk the stupid lighting tent and go back to cardboard boxes lined in matte shelf paper.

Anyway, apologies also if some of these break the bounds of the blog columns. The extra width is worth the sloppy amateurism, and I plan to change the narrow template soon anyway.

So ze Knight, he is dark! 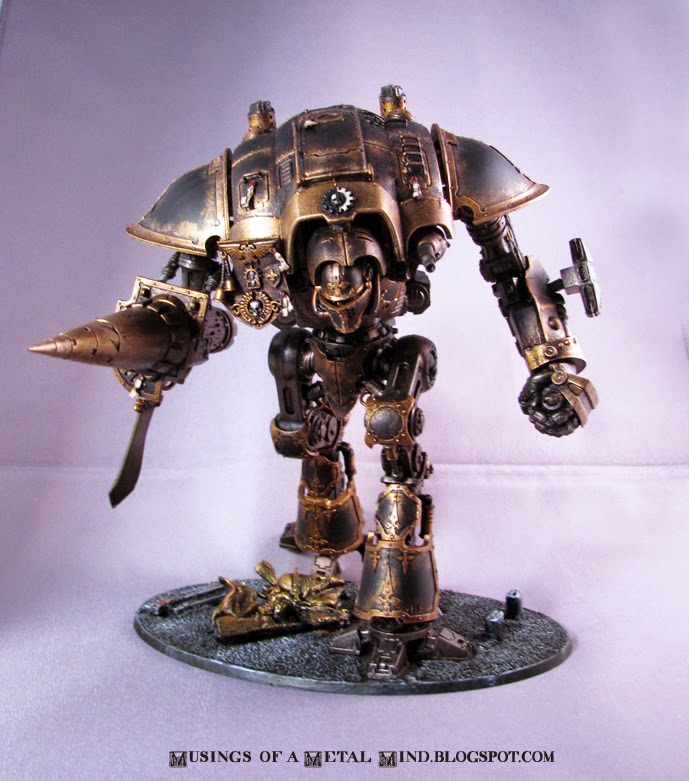 He is also covered in so many damn pointy things, the camera has a hard time focusing. I've shot planes, tanks, tiny figs, all sorts of things, but this sucker? Sheesh! He's also the tallest model in my collection by far. Taller than even the Warhound.

Also, again, sealing this thing killed the paint. It had so many subtle tones in the metallics before, and now it makes me sad. I need to find a better seal. Anyone? Ideas? Tips? 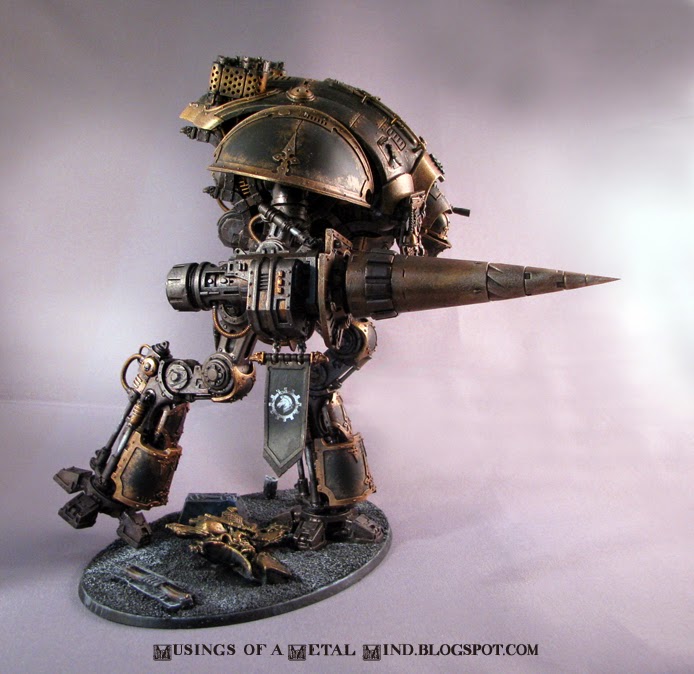 Those legs owe their existence to some heavy pinning, green stuff, and Defiler legs (which are perfect for extensions, by the way, especially if you think the FW ones are too damn tall, which, sorry FW, but I do). Once you get to cutting, the Knight kit is super posable. Yes, the hips get a little narrow, but quite honestly, the originals are splayed pretty darn wide, and would best be mounted on larger ball joints anyway.  Lengthening the legs is super easy, even the pistons are just plastic rod and pipe, with the bog-standard kit ball joints on the end, filled out with green stuff: 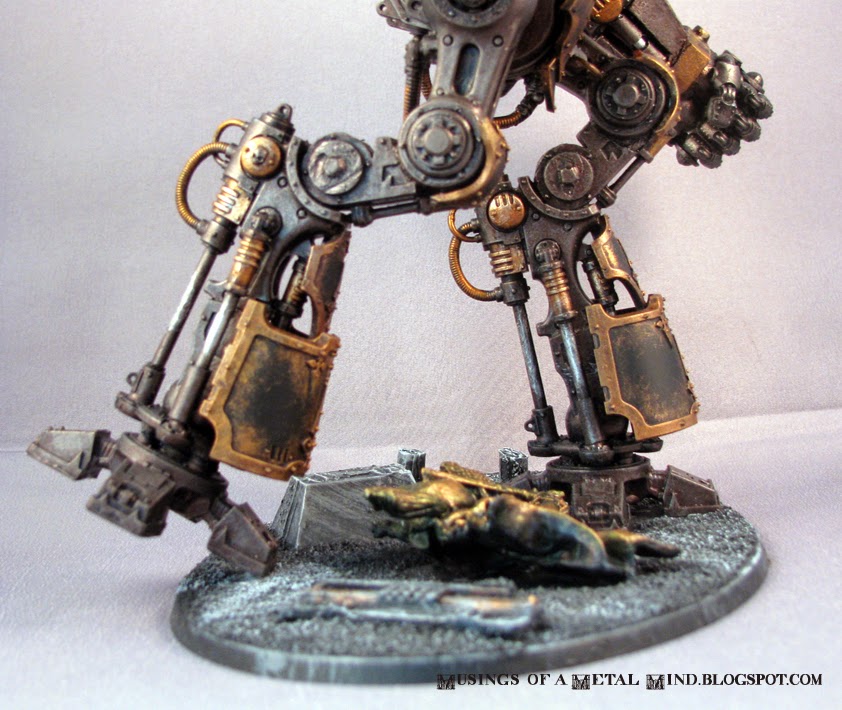 Being a mysterious disinherited knight, he carries little in the way of heraldry save his battlefield honors. 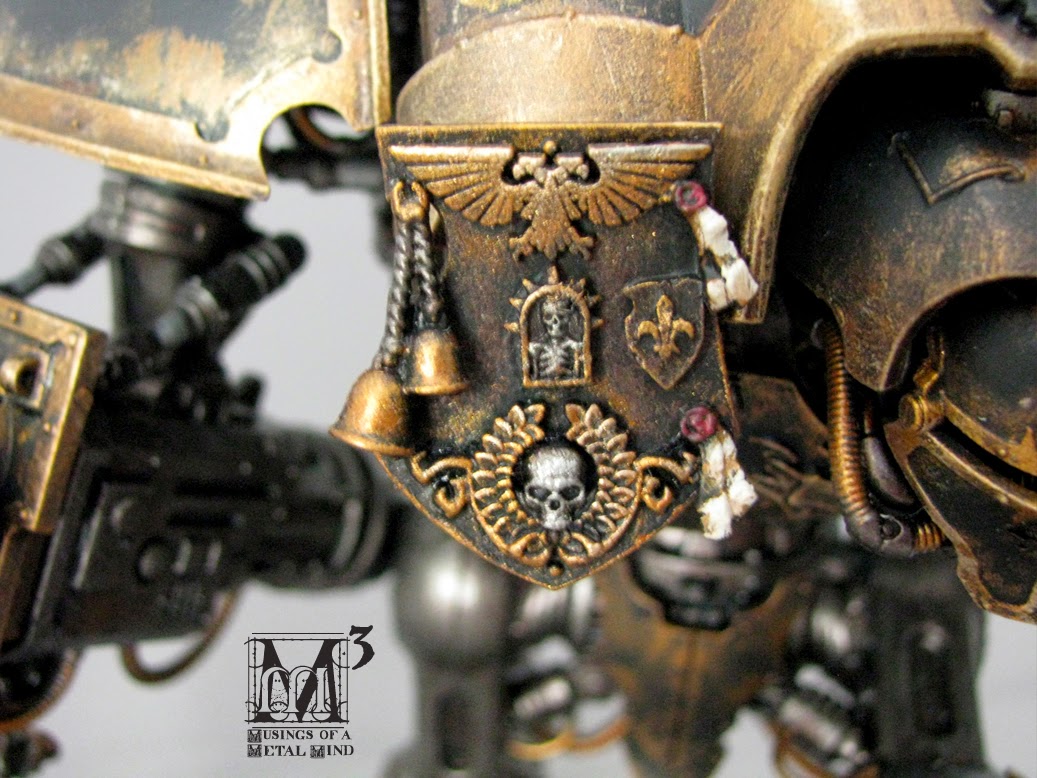 The Imperium above all, with the Emperor at its center, a Knight Charter Honoriam at ht e bottom, and to the left and right the fleur-de-lis of the Ecclesiarchy and a Bell of Lost Souls honoring fallen comrades-in-arms. As for personal heraldry, that's all been scrubbed. He carries nothing identifying save the little cog-horse on the banner which itself only says "Mechanicum Knight" (and yet, not a shred of red on him... oh, the mysteries abound). 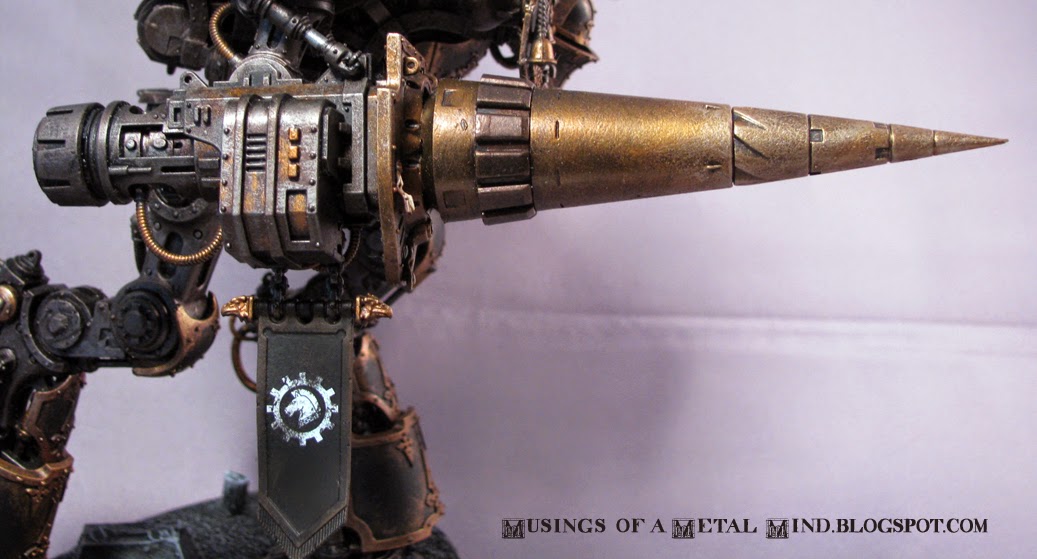 The FW lance on their model looks so depressingly underwhelming to me. This lance is courtesy of a Modeling Support Goods Kotobukiya kit that costs like $5 from Hobbylink Japan. Looks like it could do some damage, eh? It spins on its mounting, too. The MSG kit is so well engineered, they made it so you could take the little wind-up rotary engine from their gatling gun and stick this lance on it to make it spin menacingly. I swear, I love the Japanese. Their hobby industry is the cat's meow.

Yes, the clip from the battle cannon is on there; I thought it made a better power pack than, say, the set of tanks from the stock kit. Besides, this sucker is, of course, modular. 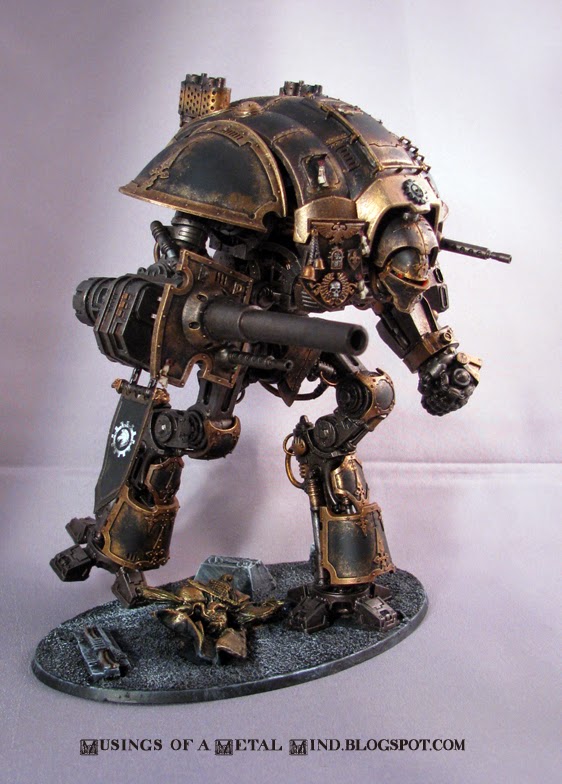 As you can tell, he also lights up. More on that in a second. I magnetized the weapon arm so everything's replaceable (what a pain the ass that was). So, he can go from this to the melta cannon as needed for anti-tank duty. What's more, everything clicks into place satisfyingly. I also fitted a ball joint inside the torso, so it rotates better. Really, I should've just found some huge ball joints for the legs and made the whole damn thing posable.... 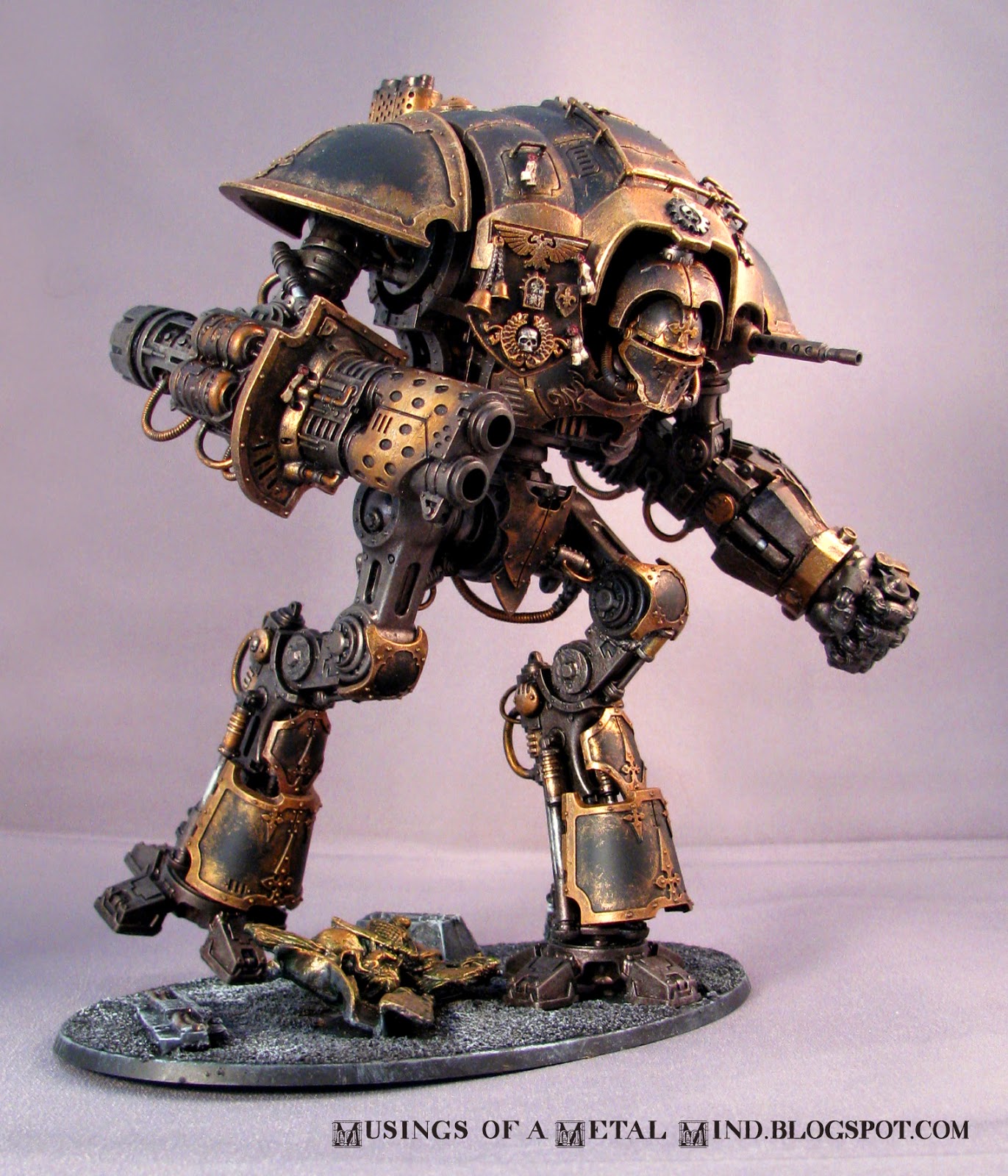 Oh hey, somehow this one is perfectly lit. Can't think how that happened. Speaking of lighting...... 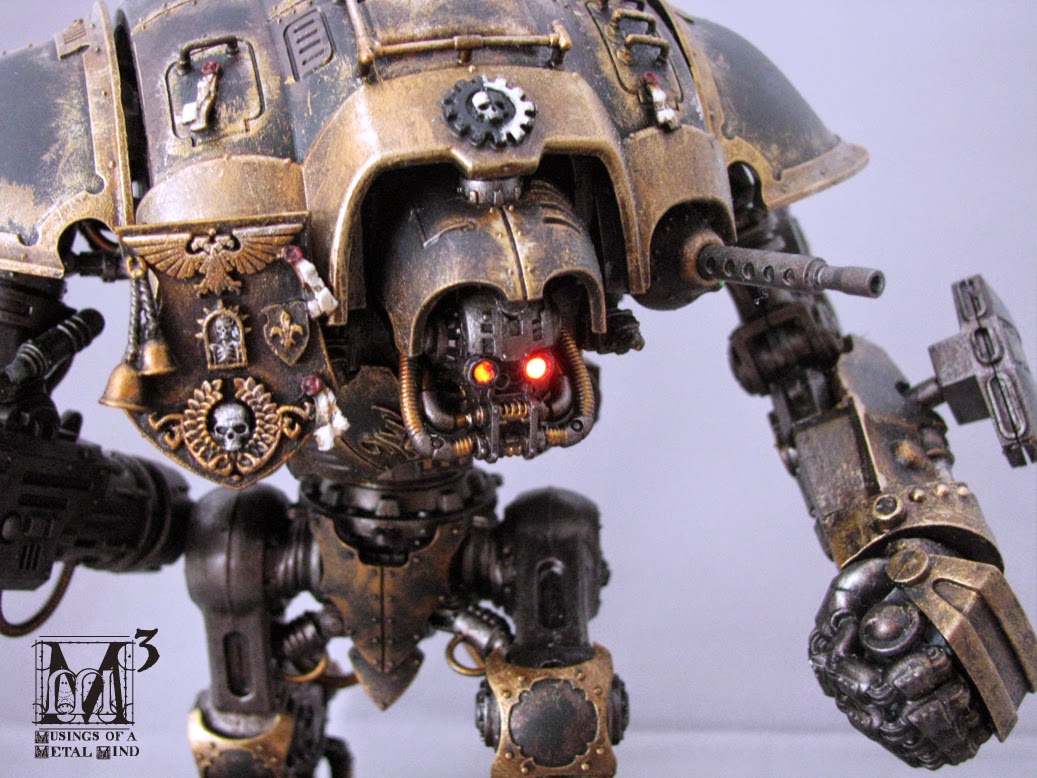 Our eyes light menacingly. This is achieved with some drilling, and the running of fibre-optics back into the torso where the lights are bolted down (somewhat). The faceplate is also magnetize. I'll get around to painting the other helmets someday.... 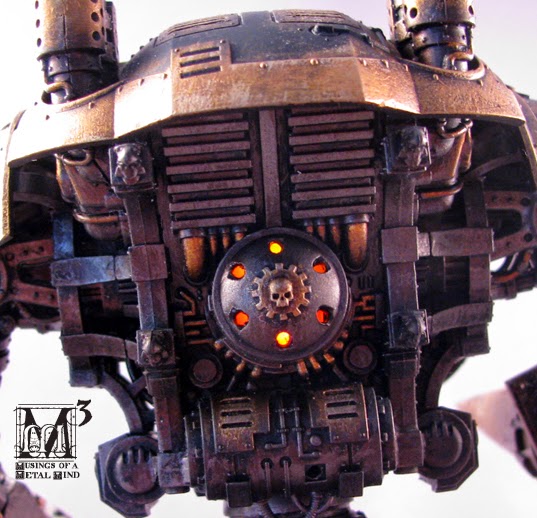 Our engine plate also ignites, because it's so cool. I can't believe none of the other folks who lit their knights haven't done this. There's two bulbs behind there with some semi-transparent plastoc over it for diffusion purposes.

If I hadn't run out of LED's I would've run on into that little boiler underneath. 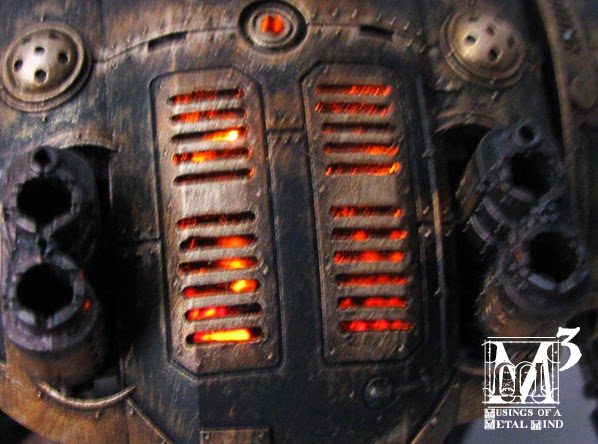 The volcanic under-lighting of the vent plate. I know, it's a terrible photo, but I couldn't for the life of me, get it to photog right. More experiments to follow, and probably a junking of the lighting tent. 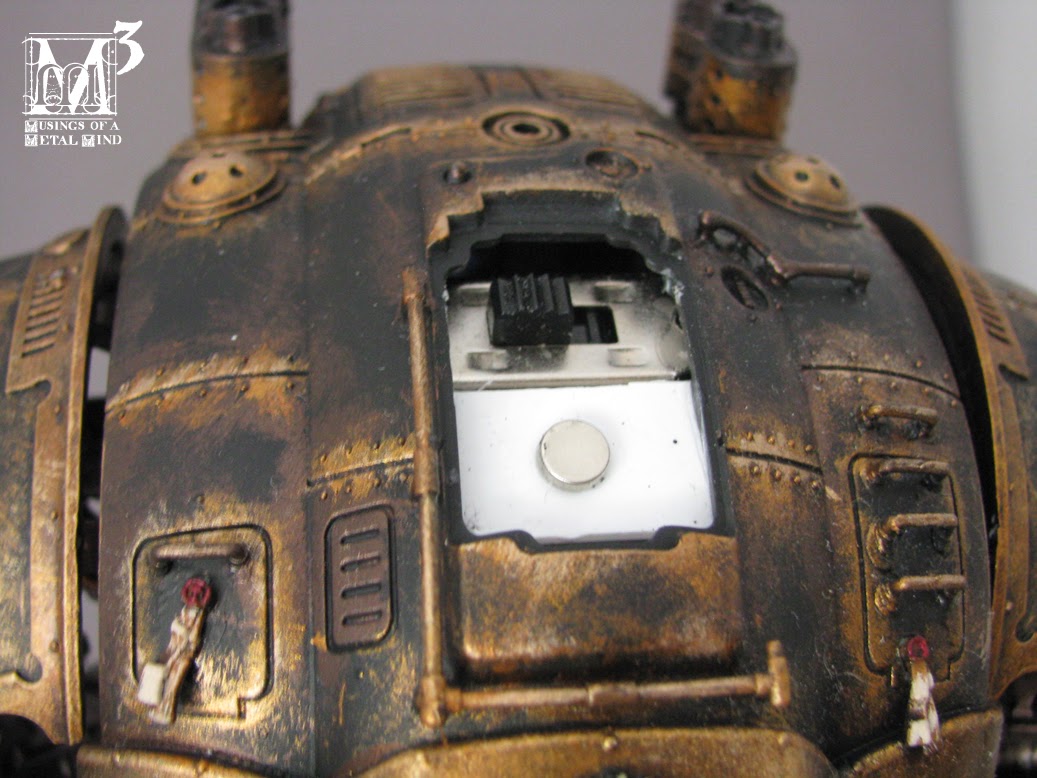 I debated contacting Hi-Tech miniatures to see if I could get the command chair to their Mechanicum dreadnought-looking thing as a bit, to put in here. Instead, I borrowed from another modeler's solution and put the switch in here under a magnetized hatch. The rest of the carapace is also removable so I can get to the battery, replace burnt-out bulbs, etc. 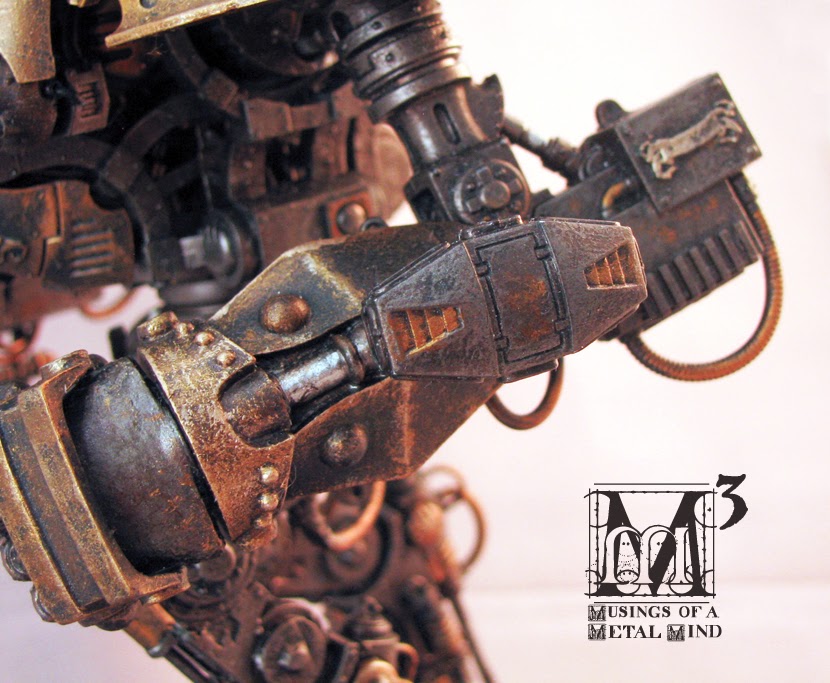 So, we come to the gauntlets. These began life as parts of a WM Menoth colossal. A bits reseller sells them separately, and I do have the rightie as well, ready for the Questoris sword once I find one. The sculptor didn't know how fists were made, however: 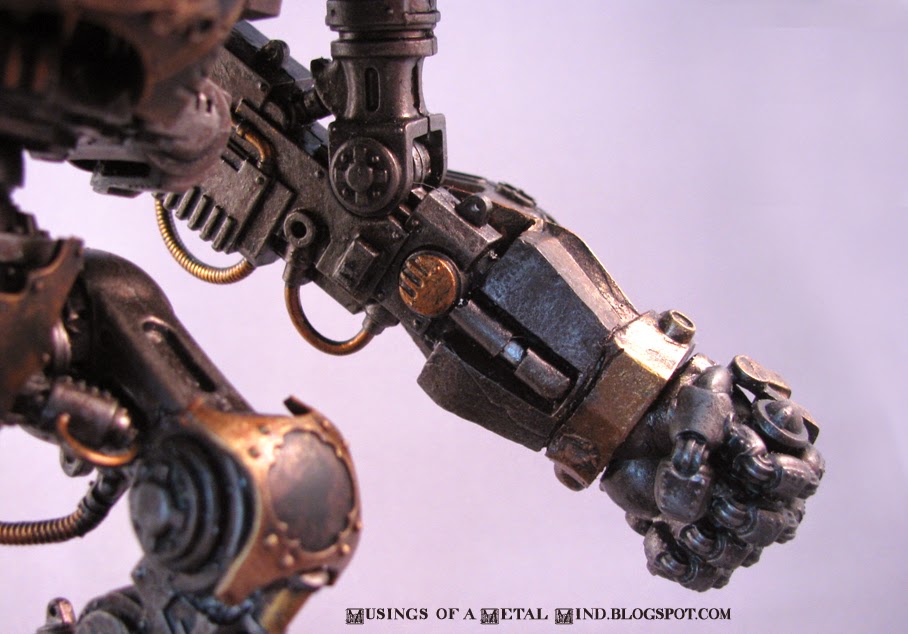 I used a bit to hide it, but those fingers aren't fully closed in a fist; there's just blob of bare resin there. Be advised, if you ever buy them, this is something you'll have to deal with by either covering it up (looks like he's holding a roll of quarters or something) drilling out the resin area (so his fist will only be half-closed) or.... shit, I dunno. Nevertheless, when I saw this on the original sculpt  I was way disappointed. That little internal piston was added by me as well; the forearm bits are actually reversed, because the Menoth arms were meant to have bigass shields on them which I didn't want to spend another $10 or so on. Plus, the shields were.... eh, not heavy and 40k-looking enough.

The Ion Shield projector was once the property of a Gundam F90-2 mobile suit. It's held onto the arm by a magnetized pylon so I can stick a gatling cannon on later. It's also one of the few parts that's left unglued, so I can do this: 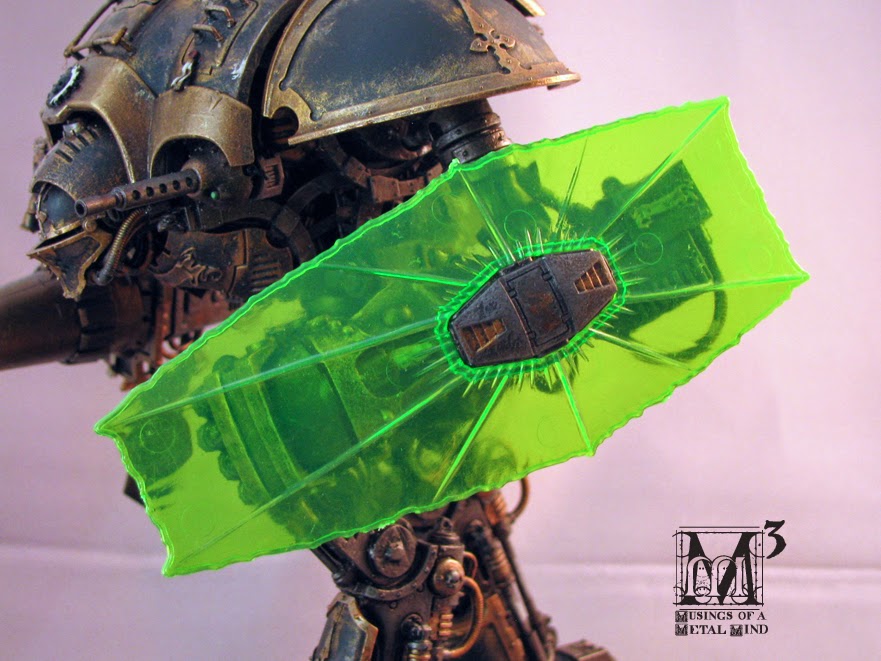 Again, I like it better than the FW spider-web thing. I know what they were trying to do, which is this. I just wish they'd put a bit more thought into it, because it needed the translucent plastic sexiness. 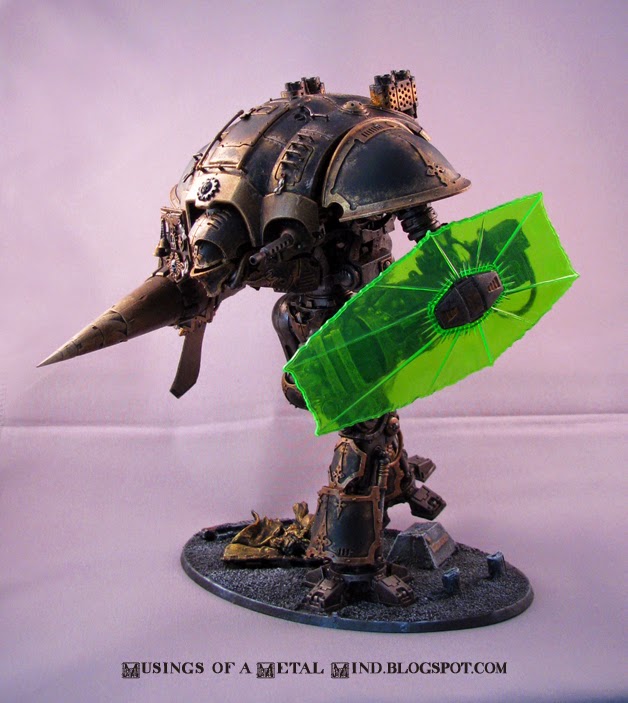 Oh, and someone commented about basing before: 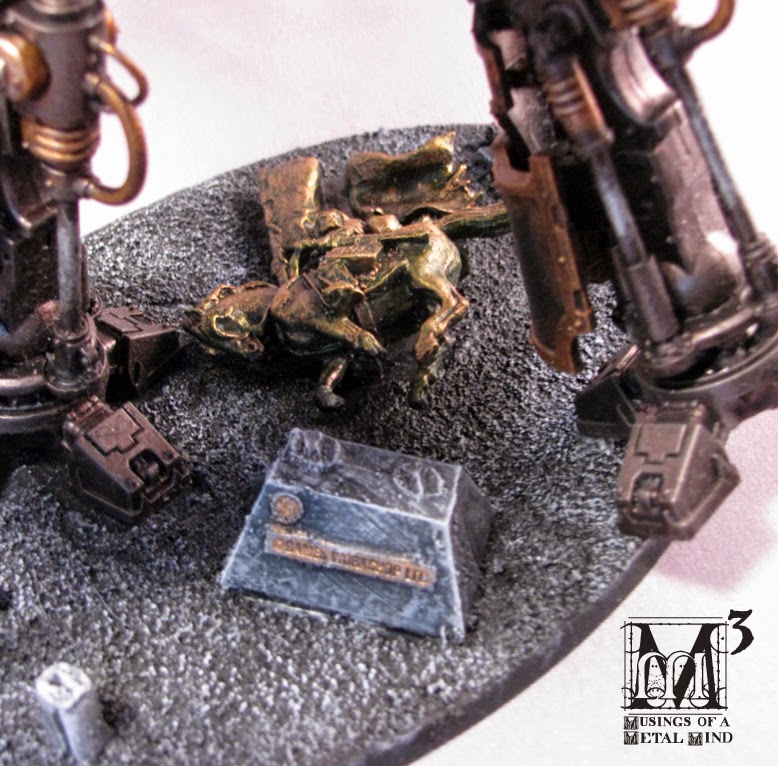 I got that old knight model as part of a bits buy, and he's been sitting in a bits box for years. He was unusable as a mounted fig because the lead horse's legs were sheared off, and would've been a pain to re-sculpt and re-mount on a base. Plus, my D&D group rarely fights mounted. So, he got the bronzing treatment (green with bronze drybrushing, plus black and green washes). Yes, the plinth is from FW mechanicum models. The little plaque says "Games Workshop Ltd."

Yes, I am also making an artistic statement. 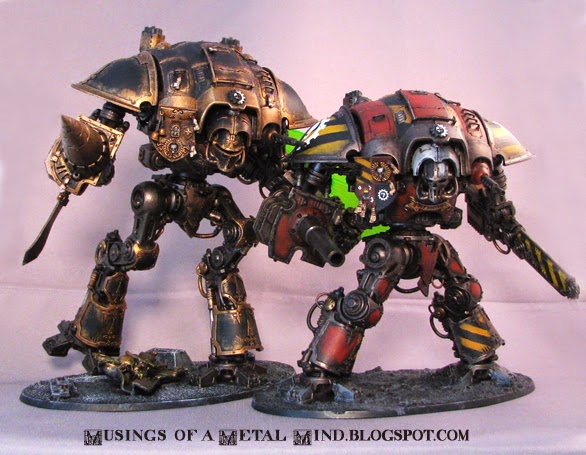 That is absolutely spectacular! Astounding work man, the conversion to the legs and arms are phenomenal. Beautifully done!

Great work. The conversion work to the legs...wow. That is a ton of work!!!

I am not the greatest fan of the clear shield...mainly because it doesn't match the same look and feel of the model.

Have you thought about using a clear one, then using taimya clear red to adjust its opacity so its not so uniform? (i think the red would go with the scheme a bit better to boot)

I absolutely adore the model (lance is awesome, pose is awesome, weathering and details are awesome)...just that shield!

@ Mordian: Thanks! Easier on your wallet than a FW kit, too ;)

@Greg: If I could find a clear/alt color that fits the same bit, I'd be open to the possibility, but they came from the same kit, so not much in the way of mods that can be done there. If it's any consolation, I usually leave it off.

This is phenomenal! Amazing work. Love it!

This is incredible! Great work.

Far and away the coolest Knight I've seen.
Two Tentacles way, way up.
:)

YYyyyep this could be my favorite Imperial Knight I've ever seen. Damn!