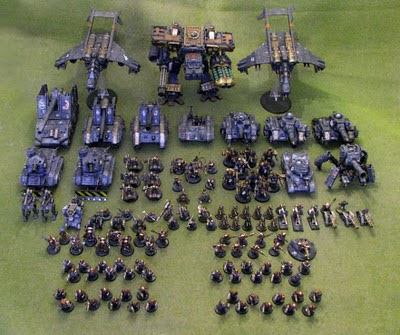 Everybody remembers this one, right? Today's post is about those little dots at the bottom; the infantry. Backbone of any army, really... 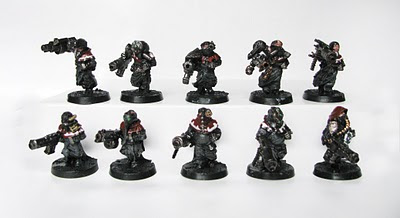 I got lucky one day on eBay and bid on lot of twenty (yes, twenty) Bretonnian Grail Pilgrims. I have never seen another, before or since, otherwise I'd grow my ranks by another two squads. Anyhoo, the converting began. Again, inspired by Mr. Taylor's lovely example, I set about giving those toothless frenchies cyborg parts (made of just about anything I could find in my bots box) and green stuff (where needed, which was not so much with these fellows) so they'd match up. Instead of lovely clean Space Marine bolters, I decided to go the heavy industrial route and fix them with Ork shootas for weapons. Skitarii weapons are described many times in fluff text but never elaborated on, but no one ever says "bolters" or even "gunpowder-filled muskets", so I figured I had pretty much free reign. Ork shootas are cheap and come in enough variety to make each model interesting. In case you were wondering, the sarge is the chap in the top row, middle, with the shield over his right arm like a Zaku. 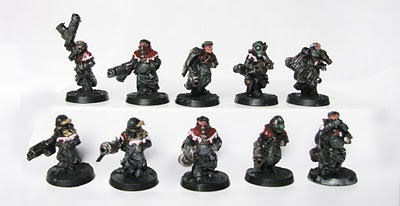 Skitarii are primarily vicious assault troopers, so these squads sport assault weapons like grenade launchers and flamers. At the time I was still experimenting with army list builds, and using melta vet squads to hunt armor was still something I eschewed. Hindsight being 20/20, I suppose I'll go back an convert up eight or so more with melta guns. 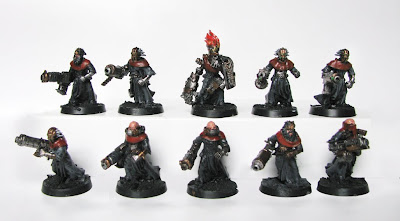 Then another odd lot came up featuring twenty Empire Flagellants on sprues, which yours truly couldn't pass up. These were a treasure trove of devotional bells, books, scrolls, tiny hourglasses, little hammers of Sigmar, and so on. Those of you who want to add little bits and bobs to the kit of any model would do well to pick up a box of these things, because they are well worth the money. (on eBay, of course; never pay full retail for GW) Plus, the variety of heads is absolutely astounding. That sarge is one of my favorites, with his flaming metal skull and power fist (taken from a Warmachine servitor who now carries a support weapon), and still carries the iconic arm shield. 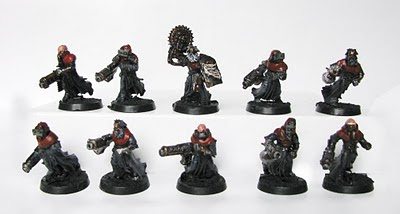 Besides being uniformly robed (a definite perk) they're also, for the most part, in action poses, not just standing there like regular guardsmen, waiting for whomever to rend them asunder. I did have to greenstuff iron shoes on most of  them, though. I had a buzzsaw arm from back when you could still order Necromunda Pit Fighter stuff to your heart's content, and fit that to this squad's sarge along with the obligatory shield. The Flagellant-based ones required more green stuff in the form of cassocks, although for some reason I didn't carry over the cog motif the Grail Pilgrim-based ones had. I don't know why, really, maybe I was tired of painting cogs at the time. 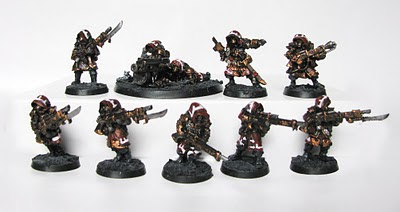 For the longest time I had considered simply shelling out for massed ranks of Vostroyans, but never found them in any quantity. This one squad I got on the cheap, and converted them up with Pig Iron Productions heads. They really are quite fantastic, and very easy on the wallet, so I do recommend you check them out if you haven't already. This squad usually gets broken up when I field them; the support weapon joins the other Heavy Weapon Squads, while the rest of the lads get bundled off into a Vendetta with some Techpriests or Squats carrying melta weapons (more on those and other stand-ins later). I made the decision to use them as Veterans to the other squads' standard infantryman role, which I suppose ropes me into fielding more (as funds allow) to differentiate the two. Sharp eyes will notice  something extra on that support team's base: 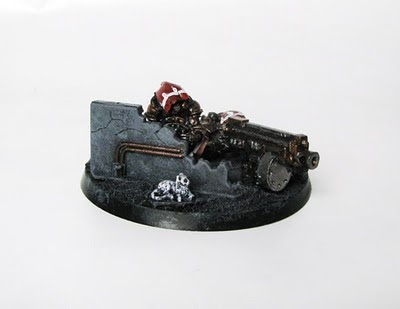 I know modeled cover doesn't count, but honestly HWT's swim on those massive 60mm bases. I also had a small Facehugger from my Alien Queen kit, but somehow I like having the cat on there more. Kitty's going to get a real shock when they open fire. 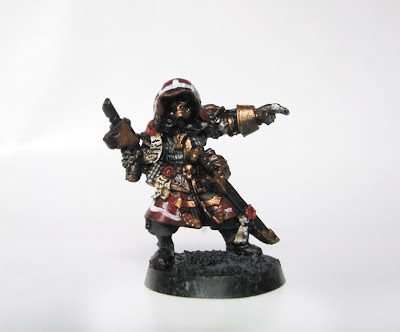 I really do love the job they did on those Vostroyan models. Why they didn't simply release a plastic box or three of them while they were re-releasing the IG I'll never know. Oh wait, I do know: they're shortsighted berks. That's why it's easier to, say, go on Micro Arts site and buy some of their Skitarii. They're almost too well-made, though, and leave little room for conversion. Where's the fun in that, I ask you? Speaking of fun, it's time to unveil the real power behind my Mechanicus forces. Did you look closely at the very first image? Did you? 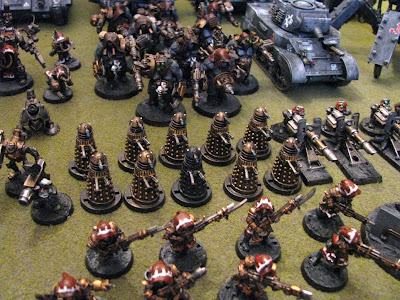 Yes, you were lead astray by all that Necron talk, pitiful humans. The Daleks are behind everything on Mars. All of it. Stop us if you dare, Time Lord. (yes, I know they need basing, I think they look a little ghetto, too; I rushed them out before a battle and never got back to them...) 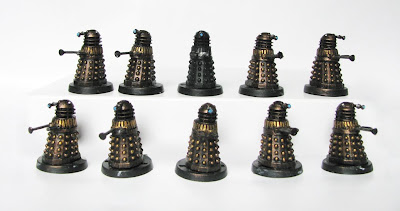 These have been in practically every army I've fielded in 40k, standing in for one unit or another. Even the most stringent WYSIWYG Nazi has never, ever objected to my Dalek squad, and they never fail to elicit a smile . Psyker Battle Squads? Storm Troopers? Daleks can do it all. Back when I was building my Necron army, I had considered taking advantage of Black Tree Design's many (and generous) sales, and making the Necron force entirely out of Daleks. If anyone wants to commission such a thing, I'd be more than glad to assist them.
Happy Easter, people.
Posted by Mark at 1:26 PM

I echo that - I'm really digging your site. You've inspired me to try some conversions lately.

Right? I wonder if I could get away with using an all-Dalek army at a tournament?

I'm loving the army and the blog matey.

Nicely done. And yes, Daleks can be anything. Get enough of them flying in formation and you could do a reasonable job of saying that they are a titan.

Fantastic stuff! I love those Skitarii, I really need to get cracking on mine. The army shot is beautiful, and the Daleks are hysterical - I need to get some of those for sure!

Keep up the great work!

What to use as a Psyker Battle Squad has been bugging the hell out of me every time I see a list build with them in it. It may be time to just go with it and use a brace of Daleks with Davros as a "minder".

I dig the army and the conversions as a whole. The somewhat disparate nature of them just adds more personality to the army.

I have to admit that doing a mechanicum army has always held a little bit of appeal, but yours is far from the squad of similar automatons that I'd envisioned. Still, yours has a whole heap of character to it, and that's something worthwhile.

The daleks are a neat little chunk of win. I think that just a little bit of basing would make them pop nicely.

I have been thinking about doing a dalek or cyberman themed Necron army for a while. Good to know no one has ever questioned the use of them on the table.

Do it, Nick! Be sure to post photos of your army somewhere so we can all admire. Everyone loves the Daleks, and it would be awesome to see them rumbling across the table in formation.