Heroes of the Imperium Part II: The Venerable Captain....

Following up on the Space Hulk squads of ..... well, weeks ago, I though I'd do a retrospective of models based on the old Terminator Captain, one of my faves from years gone by. 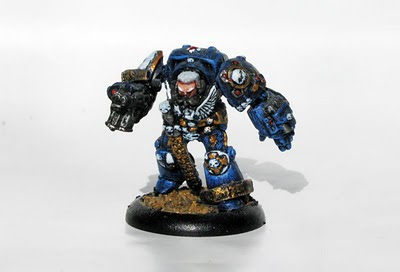 First up, my first marine ever. This captain model has been stripped, re-posed, and repainted. I formed a couple of metal sprues into relief panels for his armor, but otherwise left the model untouched. I miss the old rules for captains having grenade launchers on their power gloves. Nowadays, they can't even have terminator-armored command squads. 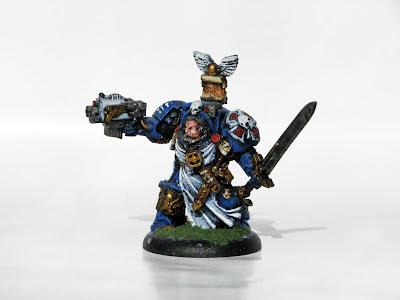 The new terminator captain, while pleasantly metal, is almost too well-sculpted to convert. While a nice hero model, I somehow still prefer the grim, determined look of the older model. I had really intended this posting to be a showcase of conversions of the older model, so he's stuck in here for contrast. The rest of the models you'll see are all conversions of that first captain model. Two of them (that first model and the next one) came with the original sets I bought waaaay back in 1989, and the rest from eBay. 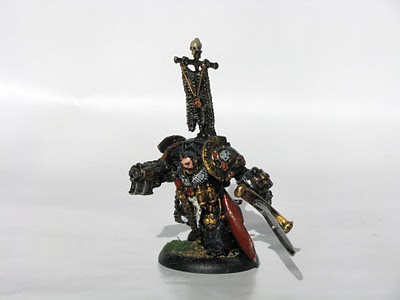 A Black Templars captain, dressed up with cape, banner, and a massive claymore in his power glove. That chainmail banner sat in my bits box for a long time before I found a use for it. The big sword is from a Grenadier ogre-sized orc. 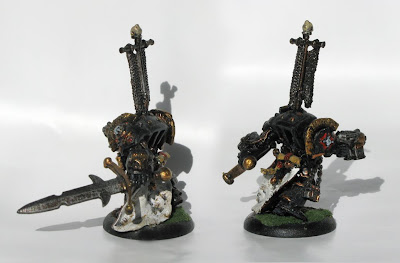 Another view, so you can see truly how big the damn sword is. You can chop into a tank with that thing, jeezus. 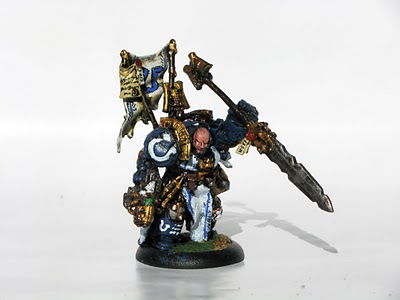 I went a little further with this Chapter Master. The head is from a SM tank crewman, and the bits are from a few ranges, not the least of which the WHF plastic Flagellants and the Dark Angels/Black Templar expansions. His right shoulder guard is a plain old lead termie arm, covered with green stuff and imprinted with an Ultramarines symbol from the drop pod sprue. The combi-plasma is an Obliterator bit on an old-school storm bolter. That bigass spear is a composite: 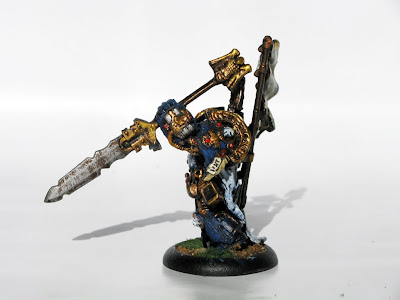 The blade, the hilt and the eagle are from three separate kits, all held together by pins, prayers and good intentions. I've never used this model in combat, but as I own more than fifty terminators, many of them won't. Maybe when I finally play a game of Apocalypse, some time in the unknown future. 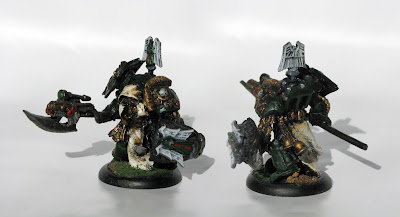 Belial, the master of the Deathwing. His armor color is reversed from the standard Deathwing white, but his tabard more than makes up for it and the dark treatment adds makes the model that much more moody. I thought about giving him the sword instead of the Templar captain, but I though the glaive looked better, and it allowed me to give him a plasma pistol mount on the blade, Grey Knight style. 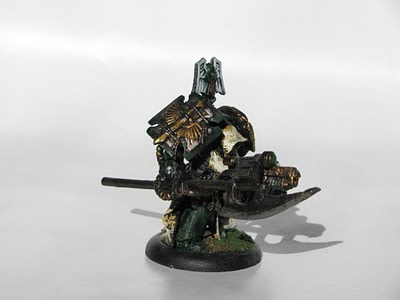 That right shoulder pad is made of a storm shield, of all things, and the bit fits perfectly into the shoulder socket. I like the look of it, and might use it on future terminator models. That right arm is plastic as well, with a hole cut into the fist for the glaive, which is a pretty solid bit. The shield I made him is actually two WHF tower shields, held together by green stuff and that Dark Angel icon. Underneath all those bits, this is an old-school model, just like the first one you saw.
Posted by Mark at 2:56 PM

I love the old Terminator Captain figure, and the conversions are genius. I now feel a sudden urge to rummage through the attic and find my old models. Thanks :D

Find 'em. If they're painted in ways you don't like, then leave them in Simple Green for 48 hours, and you'll have a wealth of new models.